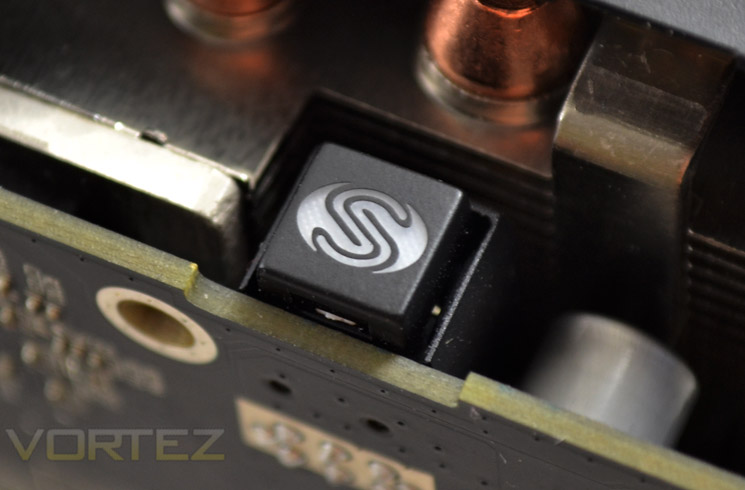 There's BIOS switch allows the user to select either legacy or UEFI compatibility modes and as an added bonus, the end user can use the switch to flash a custom BIOS while still retaining the safety of the original BIOS which is a great feature and one we wish all cards had. 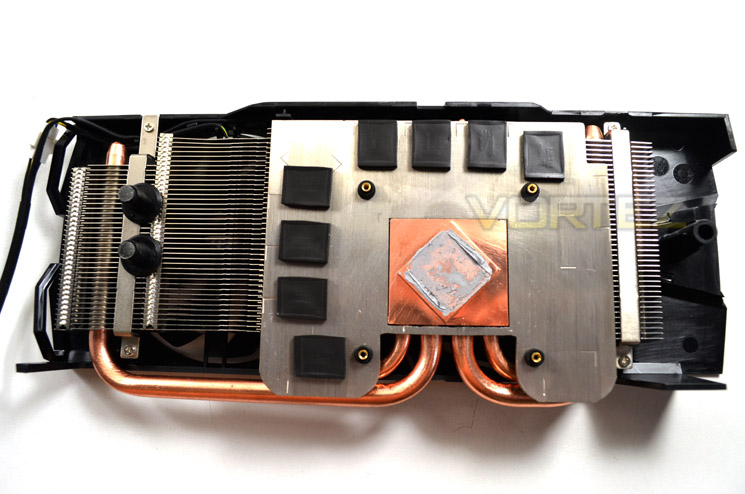 Removing the cooler was a simple task of removing 4 spring-loaded screws. Our sample did not come with any 'warranty void if removed' stickers but we would advise you check with your local vendor to ensure this is the case should you wish to apply your own thermal interface material or perhaps add a GPU waterblock. 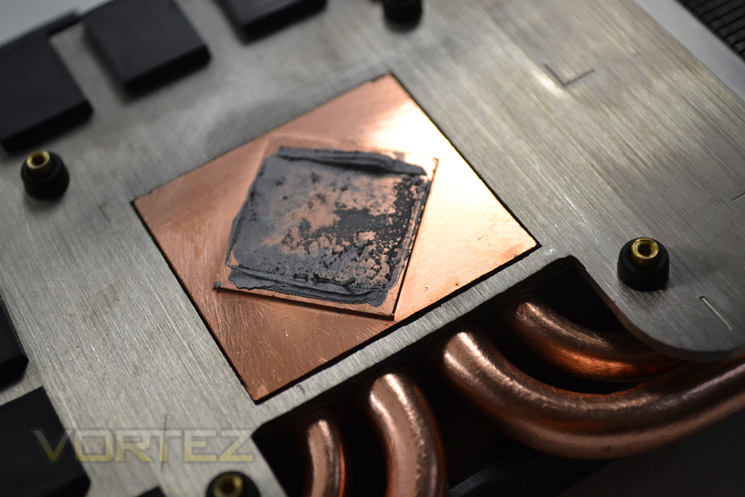 The heatsink itself is made up of a direct contact copper plate which is soldered to four copper heatpipes. These heatpipes stretch out amongst the aluminium finned heatsink array to best dissipate heat produced by the GPU core. 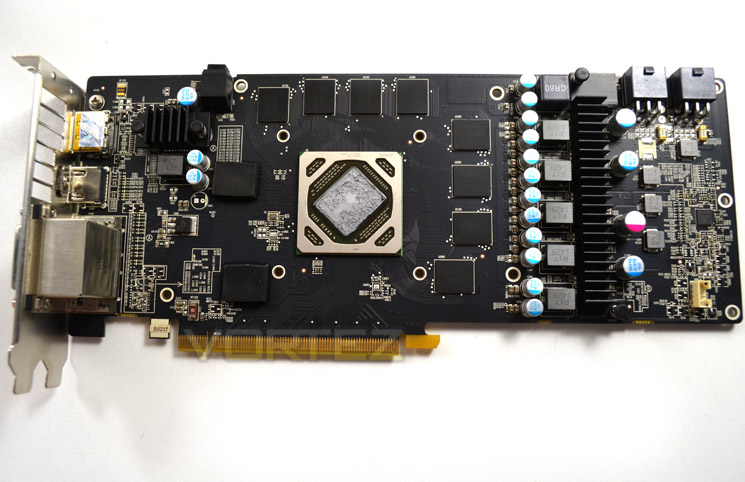 Note the distinct lack of memory here. 2GB we feel is enough for 1080p gaming but any higher than this, especially if you like to add all the 'bells and whistles', you would do well to consider and card with more vRam. Also note the heatsinks added to both sets of the VRM which are not cooled directly by the main heatsink assembly. 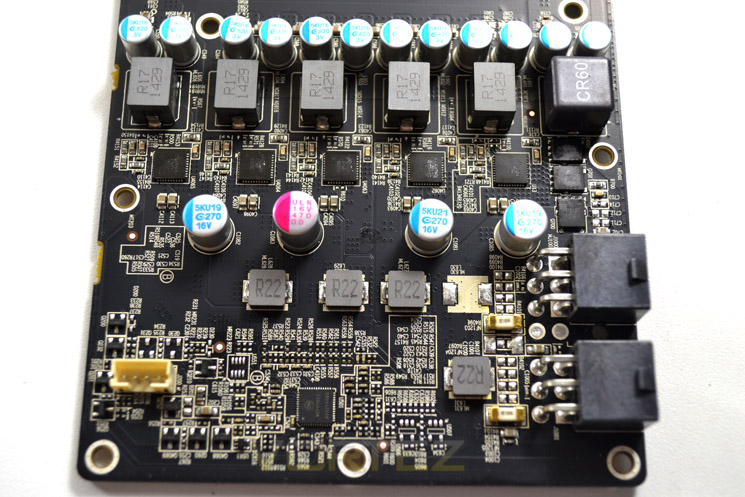 The voltage regulation module is made up of a 6+1 power phase design using DrMOS components. The NCP81022 voltage controller takes care of these voltages which also allow minor voltage changes via Software for overclocking purposes. 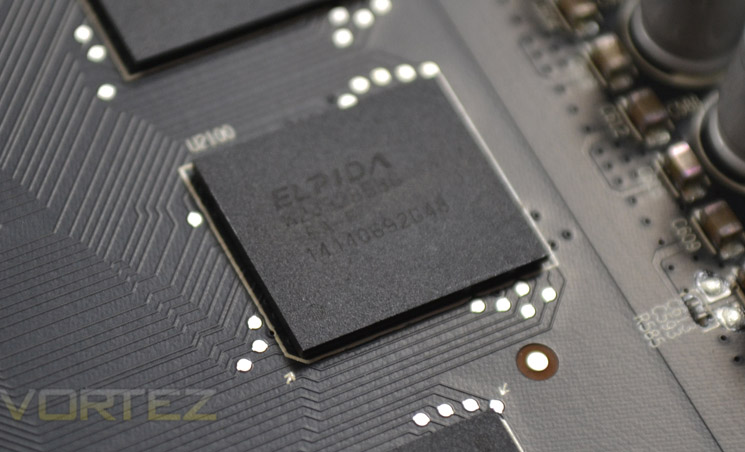 The GDDR5 memory in use comes courtesy of Elpida and carries the product code of W2032BBBG 6A-F meaning they are rated to run at 1500 MHz (6000 MHz GDDR5 effective). 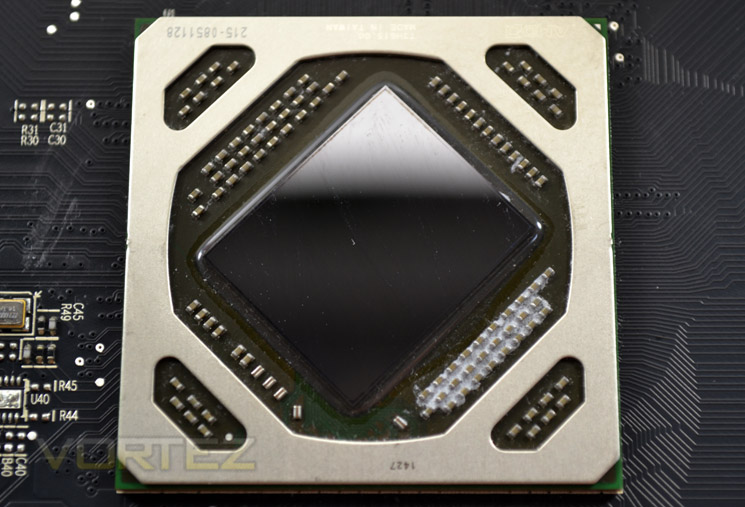 With a transister count around the 5bn count and a die size of 359mm², the new Tonga core utilises a revised version of Graphics Core Next architecture along with a surprising decrease in memory bus-width. This is slightly larger than the Tahiti core it replaces which does present the question of what else is hidden in the core? We suspect a 'full fat' version is on the cards which could well be a retaliatory shot being held in reserve for the impending refresh of the NVIDIA GPU family. So with AMD keeping their cards close to their chest, only time will tell the true extent of the Tonga design and capabilities.