Considering the 100-hour battery life (which would typically require a high capacity battery) and relatively large dimensions, we expected the headset to be heavy and cumbersome but Sennheiser have done a good job of shaving the weight down to just 285g. It feels light on the head with a good, but not overpowering, gripping force to keep it in place.

Adjusting the earcups on either side was positive, just how it should be. They remained in place with a solid grip and provided a vast amount of adjustment for a range of head sizes. The earcups are mounted on a ball and socket design, allowing a great range of motion to form a flat, neutral contact patch on the sides of your head, reducing pressure in any specific area.

The large memory foam earcups, with a leatherette outer and a really fine suede inner, are around 18mm thick and offer lovely, soft comfort for hours of use; this has been the result of extensive ergonomics research of the human ear and is designed to reduce heat build-up and sweating around the ears. The flat surface covering the drivers has also been recessed further, helping to prevent any part of your ear coming into contact with the internal structure of the headset.

Now, for the audio quality. This is more than up to the job at hand, with clear highs, deep bass, and an overall balanced and rich soundscape within the headset. The 2.0 stereo sound is nothing short of superb, frankly. One weak point, however, is the upper volume limit. We found the headset wouldnt really go quite loud enough for what wed like; perhaps this is a limitation of the battery or just a safe volume limit that Sennheiser feel doesnt need to be exceeded, but regardless of the reason, a bit more volume would be nice.

The software also features virtual 7.1 that can be toggled on, we tried this with music and videos and werent too impressed, finding it to muffle the sound a little and remove some of the clarity, but when using it to play video games, the experience was very different. We tried it out in a variety of games over our lengthy test period; our favourites were racing games and FPS games. Within racing games, the cockpit view is preferred, this can hinder your ability to see other racers around you but with the 7.1 audio enabled, it gave a genuine sense of naturally knowing where they are, if they dive down the inside in the braking zone or whatever. Likewise, with first person shooters, sometimes the audio can be just as, if not more, important than the visuals, listening out for opponents creeping in the adjacent room or for heavy machinery approaching from the east, whatever it may be, its often audible before its visible, and again, with the virtual 7.1 enabled, it was easy to pin-point the direction. 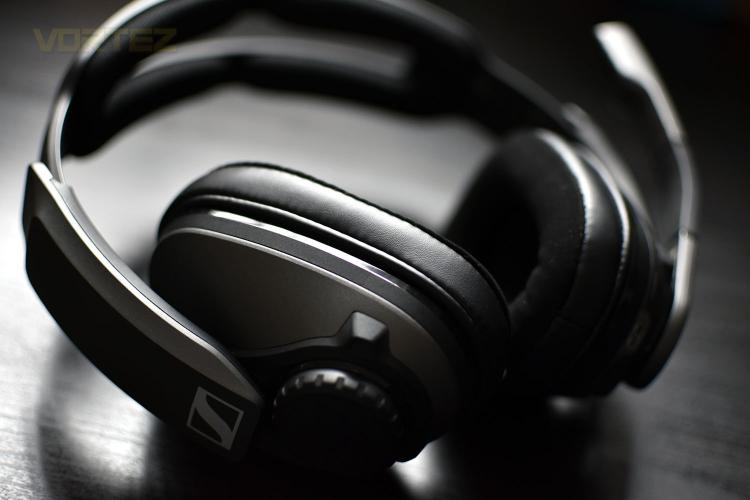 As weve mentioned a few times, Sennheiser reckon this headset can last up to 100 hours. This is one hell of a claim, considering the average wireless headset lasts between 15 and 20 hours, with the GSP 670, that this headset is based upon, being no exception. However, we found it to be absolutely true, the headset lasted about a fortnight of regular use before it needed charging. If you were using your computer for a couple of hours here and a couple of hours there, this could last a month or two on a single charge, not a bother at all. Charging from empty to full takes around 4 or 5 hours, but for sake of testing, we found that 15 minutes of charge allowed us about 8 hours of gaming without it complaining once.

Before we move onto the microphone testing, the actual boom of the microphone on the GSP 370 is enormous, its almost reminiscent of the coaches on the touchline during an American Football game, but it feels solid and hinges down to be in line with your mouth well. It can also be pushed up into its vertical position to mute, you feel the switch engage on its way up.

Build quality, all things considered, is excellent. It feels robust, well-engineered and made from premium materials, but theres one small issue that we just cant get by. Theres a toggle switch on the left earcup that turns the headset on or off. If you happen to listen music quietly, or if the headset is outputting no volume whatsoever, that switch can be heard rattling very clearly in the left earcup. I found this to be even more annoying when wearing a hoody and turning my head to the left for my left monitor  the switch would catch on the hood on top of my shoulder and make a tick noise inside the headset.
We have since been made aware that our review sample is from an early production run and Sennheiser have since

Sennheisers GSP 370 uses the Sennheiser Gaming Suite software on Windows 10 PCs but goes without on Mac operating systems and the Sony PS4. Below is a demo of the software, which we found to be very basic but functional.

Well also use the software demo as an opportunity to demonstrate the microphones ability.