👤by Matthew Hodgson  Comments 📅19-12-19
Software & Performance Testing
Software
SteelSeries use their Engine 3 software for all of their peripherals to make adjustments and configuration settings as easy as possible. We find their software suite to be intuitive, responsive and stable, which is all you can really ask. Below is a software demo of the Apex Pro, but everything for the Apex 7 is identical, apart from the mechanical key adjustments.

Performance Testing
To give the SteelSeries Apex 7 & Pro a thorough going over, we used the keyboards for around a week each and played several games on them to really see whats what.

Well start off with the common features between the two then split our experience from there. The RGB illumination was beautiful, but thats exactly what we expected after our experience of the Apex M750 from two years back. The effects were smooth, with loads of them to choose from in the software, but the biggest positive of the RGB lighting was that the majority of the light appeared to come through the keycap instead of bleeding around the edge which is often the case with mechanical keyboards; dont get us wrong, theres still lighting in and around the keys but we much prefer a bright, vibrant keycap shining against a sea of duller lighting.

Thanks to the wrist rest, which doesnt budge at all by the way, the keyboards are beyond comfortable to use for long periods of time. Were a big fan of including wrist rests with keyboards, especially as we sometimes spend upwards of 10 hours a day typing away at a computer, but some can be about as much use as a chocolate fireguard. The soft, cushioned leatherette types, like you get with Razer and Logitechs high-end offerings, are our favourites but this comes in at a close 2nd place with the soft-touch rubber coating being surprisingly accommodating to the wrist. The only trouble is, due to it being so soft, we did notice that a metal watch strap had already begun digging into the coating after only a week of use so the longevity of the wrist rest can be brought into question  not an ideal situation when youve forked out £180/£200 on the keyboard. 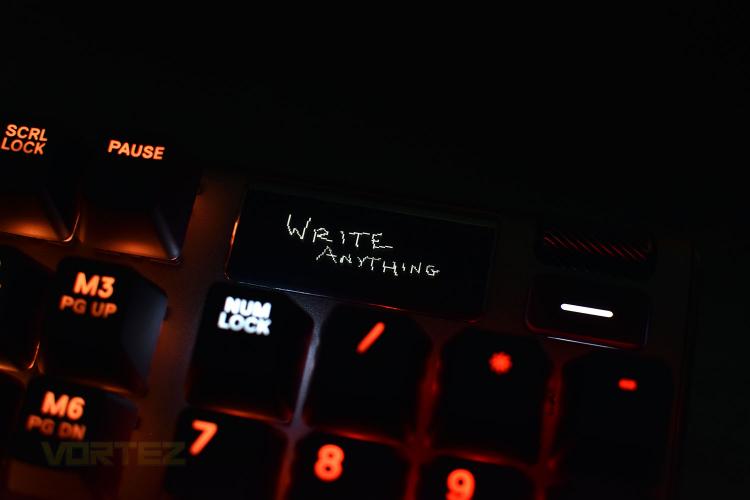 The OLED screen in the top right, with a 128 x 40 resolution might sound like a bit of a gimmick, and to be honest with you, it is just that, very gimmicky, but it does have some merit. The Discord notifications can be handy if youre in a game and only use a single screen, and if you want to adjust settings on the fly without opening the software, the button and scroll wheel next to it can be used, but in all likelihood, youre just going to open the Engine 3 software suite and fix anything that way. The biggest issue that the screen faces is its positioning; if you tend to sit back and get comfortable, like myself, the screen will be almost entirely obscured by the NUM LOCK and / keys which renders it almost completely pointless, however, there are plenty of players who lean forwards, with their nose much closer to the monitor, trying to gain the competitive edge; this screen would be a short glimpse away, if you needed it.

Now, for the keyswitches, well start with the Apex 7. We tested the SteelSeries QX2 switches back in 2017 and found them to be perfectly good for a mechanical switch, with a 100M actuation lifespan, good RGB LEDs, a light resistance and relatively short actuation point which suited gaming well but, as time has gone on and weve tested more and more different types of mechanical switch, it doesnt quite cut the mustard anymore, its a little too mushy and definitely too loud to compete with the likes of Cherry MX or Razer Mech switches, though it would be nice to try out their Brown or Blue variants to see how they compare to the equivalents in the market.

And finally, the part weve been wanting to tell you about since these keyboards arrived, the Omnipoint Mechanical Adjustable Keyswitch. Before we start, lets get it out the way that the resistance, feel, required pressure or bump cannot be adjusted, its purely the actuation point only, but still, let us tell you, it changes everything.

For starters, the keys themselves lack any kind of tactile feel, but manufacturing in a resistance bump, where the actuation point can move from 0.4mm to 3.6mm, just wouldnt work, so going with a linear key makes perfect sense. From a gaming perspective, they offer so much; you can alter your WASD keys to respond at the 0.4mm point but have the keys surrounding it require more than that, which once youre dialled in and become used to the settings, can help prevent you pressing the wrong keys when things get hectic. But on the other hand, if you do a lot of typing, the keys arent the best and youd perhaps be better served elsewhere, if youre not happy with the compromise.