When we reviewed the little brother to the N4310 last year, the N2310, we were impressed. Not least because of the price because for little more than £100, Thecus had supplied us with a no-nonsense 2-bay NAS. Today we set our sights on the 4-bay version to see what, if any, improvements have been made other than the obvious extra 2 bays to house your storage. On the face of it, an extra £100 is a lot to pay for simply adding a further two bays so it will be interesting to see the performance difference between the two devices and any additional features the bigger NAS possesses. 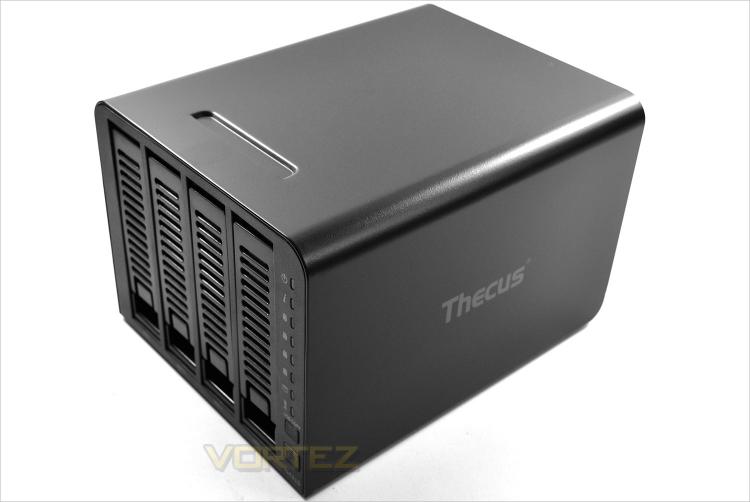 First of all we think it is fair to give an 'lived-in' overview of the N2310 as it has been over 6 months since we reviewed that model.

We mainly used the device as a media server and made use of the included PLEX app'. This is perhaps will be the most popular use of the device Uploading media to the PLEX app is a little cumbersome at first but once you have the gist of uploading files to the correct folder and refreshing the movie list, streaming a variety of movies up to 1080p was for the most part trouble free. It was bearing in mind that a good router will be required if you wish to stream media with a very high bitrate as this can saturate your bandwidth, especially if you are accessing multiple files from the NAS by multiple devices for example a SMART TV in one room and Android/iDevice from others.

Perhaps our biggest niggle with the setup we were using is the N2310s habit of shutting down/restarting (despite us telling it not to) and requesting a different IP address. This inevitably messes with the PLEX server address which shows there is no attached storage or the storage is unreachable. OF course this could also be a fault with the router despite a static IP being assigned to the unit. Regardless, if you are not comfortable with basic IP configuration/discovery, finding the NAS on your network and then assigning a new IP could become frustrating. This issue inevitably effects accessing the server from wirelessly too which becomes all the more difficult if you are not accessing it via LAN.

Regardless, we persevered with the N2310 and it has served (pun intended) us well. Now to see how its bigger brother stacks up, the N4310...

About the N4310
Thecus is pleased to announce the release of the newest addition to its lineup of home, SOHO, and SMB NAS solutions, the N4310. Featuring an AMCC 1GHZ SoC with 1 GB of DDR3 memory, the new 4-bay NAS offers exceptional performance and easy data management at an unprecedented value.

Our mission begins with your needs. Adding the N4310 to our already extensive product portfolio allows Thecus to continue to redefine the NAS market, said Florence Shih, chairperson at Thecus. The N4310 provides the versatility and functionality required to reach the full spectrum of SOHO and SMB user needs.

There are currently 981 user(s) online:
Google