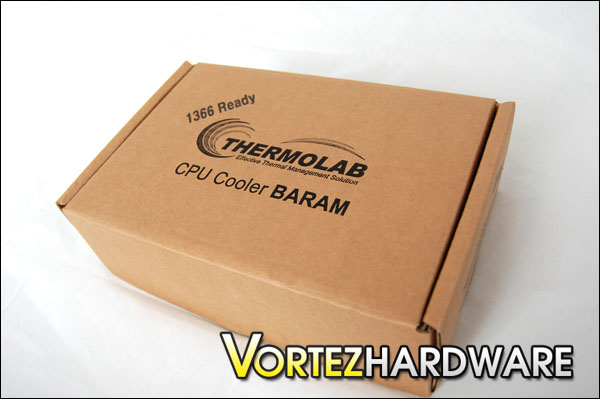 The box in which the heatsink comes packaged
The packaging in which the Thermolab Baram comes in is simplistic but very professional looking. The first impression you get from looking at it is that they mean business. The box is fairly typical for computer components whereby the front flap has to be removed from the side inserts first so that the whole cover can then open. Inside the box the heatsink is covered by another pre-fitted piece of cardboard that is compartmentalised to also retain the provided bundle securely. 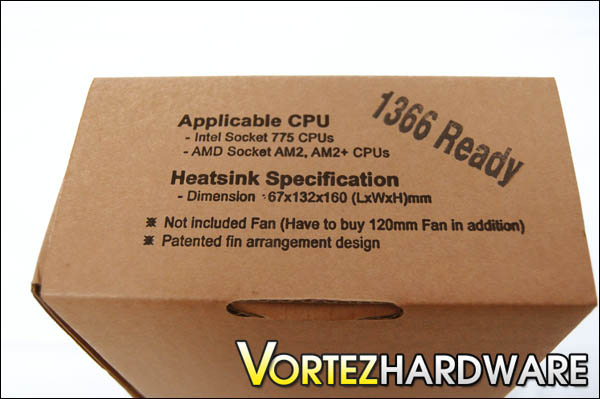 Side of the box
On the side of the box is listed some of the specifications. Thermolab have worked hard to ensure compatibility with all recent AMD/Intel mounting holes. As mentioned, the heatsink does not include a fan but in some ways, it allows the user to buy their own one based on their preference rather than paying extra for a pre-included fan that would be of no use. 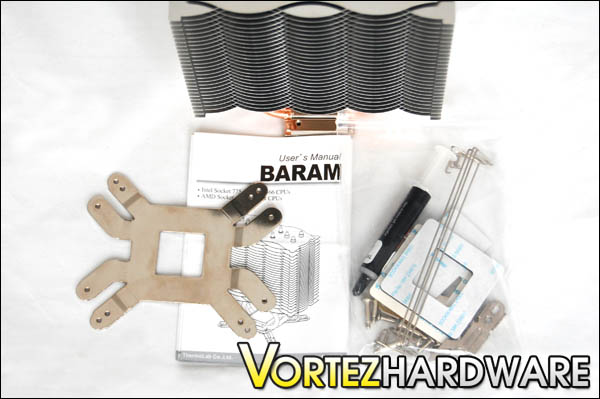 The bundle including some useful spare screws
Thermolab provides all the necessities with the Baram heatsink. The metal motherboard back plate accommodates for the most recent sockets from both Intel and AMD. For motherboards that don't already have a pre-fitted plate for the mounting mechanism, a rubber pad is provided. Along with all the screws (1 spare for each), there are 4 wire clips to hold up to 2 fans for some push/pull air flow. As standard, there is a tube of thermal paste bundled and as seen from the previous reviews, it performs quite well. The installation manual is a mere sheet of paper with some instructions and despite that, it makes installing the heatsink very easy. (Note: the original Baram heatsink had a more complicated manual and installation was a pain) 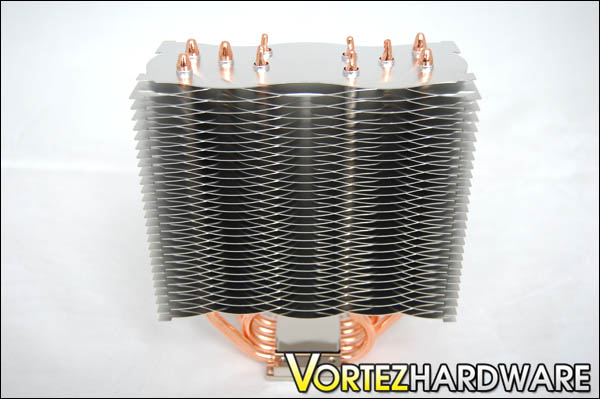 The heatsink
The heatsink stand fairly tall at 160mm putting it 2mm that the Noctua NH-U12P. It is a very attractive design using a blend of curves and flat finish on the fin plates. This produces a shiny mirror like finish. The contrast of the silver aluminium against the copper heat pipes refrains it from being dull on the eyes.