Product on Review: Gears of War 3

Every so often a game comes along that redefines its genre. When third person shooters were becoming run-of-the-mill affairs seemingly lacking in depth and serving no purpose other than to empty ones back account, it took EPIC games to raise the benchmark with the amazing Gears of War. It breathed fresh air into a stagnant sector by introducing actions such as taking cover along with using squad tactics to achieve the best outcomes. With stunning graphical (and at times graphic) content, Gears of War soon become the hallmark of third person shooters. Fast-forward nearly 5 years and we have the third incarnation of this franchise, such was the original games popularity.

As with the two former games in the trilogy, centres its storyline around the main icon of the Gears of War family, Marcus Felix: The gung-ho, outspoken but often misunderstood seasoned veteran of the Pendulum wars. Despite his heroics during this war, Marcus Felix was thrown into the penitentiary for abandoning his military post in order to save his father, only for his father to apparently die anyway during the attempt. 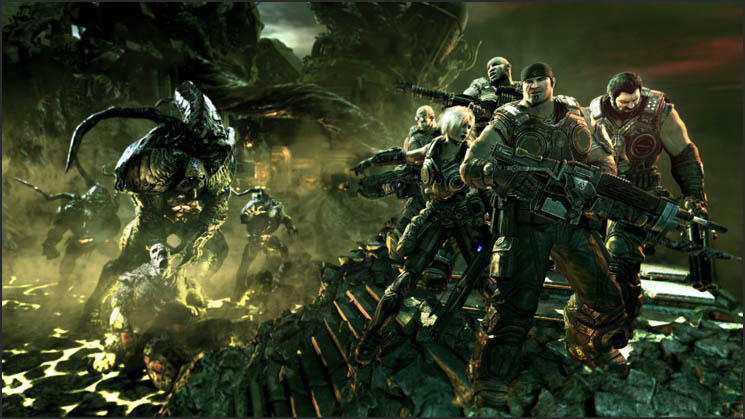 Gears of War 3, takes place some 18 months after the flooding of the Jacinto Plateau on the planet Sera (Gears of War 2). All human survivors took refuge on boats, ships and the island of Vectes in an attempt to rebuild their lives. It is on one of these ships that we find the remnants of the COG Delta Squad who are beginning to succumb to life without war. A touching moment is when we see Dom tending to his plants which is a far-cry from his previous mannerisms! The silence is soon broken however when a transport chopper arrives on the ship with the COG Head of State, Chairman Prescott who hands over a disc which informs Marcus Felix that his father is still alive but a prisoner of the Locust Hive. And so the story is set with the main task being for Marcus and his crew to rescue his father who apparently has the key to end the Immulsion infection once and for all.

The game is available in three guises, Standard, Limited and Epic editions. The Limited edition has an Octus Award box with Adam Fenix's Octus Service Medal, a fabric COG flag and online content (playable Adam Fenix character). The Epic Edition contains everything the Limited edition has but also includes a Marcus Fenix Statue, 96 page booklet containing the games artistic impressions and additional weapon skins for the various weapons found in Gears of War universe. Whichever version you choose will depend on how much of a fan of the genre you are but for all intents and purposes, the game itself is unchanged save for the additional content afforded to the special additions.

Lets take a look at the Campaign section of the game...