👤by Richard Weatherstone  Comments 📅19-07-11
Conclusion
It's been a bit of a rollercoaster ride testing this card. To begin with I'd like to talk about the product package as this, like the rest of the card has both its good points and not perhaps not so good.

The packaging of the card, while attractive is perhaps not the most protective. The lack of support for the graphics card may mean the card does not arrive to you in pristine condition. With the lack of any substantive brace, there is more graphics card movement that I would like inside the box. We are all well aware there are some couriers who like to use our shiny hardware packages as make shift footballs so it's imperative ZOTAC up their game with regards to the protective element of their packaging. The box contents are very good however and it's great to see a mid-range card having a game included. For that ZOTAC are to be applauded.

Should the card arrive in one piece, you will certainly not be disappointed in either its looks or performance. Aesthetically, the card is perhaps one of the best looking mid-range cards available. The black and orange theme is carried throughout the cards design to great effect, even to the point of including colour coding DVI ports. It's attention to the smaller details that separate cards such as this from the crowd and with manufacturers having free reign over their own GTX560 design, competition is high to make their product shine. ZOTAC have certainly succeeded to this end.

I was slightly disappointed at the cooling performance of the card as I expected it to perform much better than it did owing to the custom cooler and twin fan setup. Sadly, heat dissipation was mediocre when the card was placed under load so while the card may look very cool, it was anything but. Add to this the whining fans trying to keep that heat under control and the whole product suddenly becomes a little less appealing.

Performance wise, the card performed very well as you would expect from the massive factory overclocks. The caveat to this though is that because the overclocks are so high to begin with, there was little left in the tank to increase those clockspeeds further. I also found that the Samsung memory used was much more stubborn than the Hynix modules found on other cards. While it is mildly overclocked already, it could not attain the same clockspeeds as the memory in our previous reviews. The card is not pitched as an overclockers dream though and the average user who wants performance straight out of the box will not be disappointed with this product as ZOTAC have done all the hard work for you by overclocking the card pretty much to its maximum on your behalf, saving you lots of time and effort. There were some oddities with the results of the ZOTAC GTX560 when compared to the GIGABYTE card, especially with the way they handled tesselation. While the cards use different memory types (and likely sub-timings) I doubt this would explain the dramatic difference in FPS. I belive this difference is most likely as a result of using beta drivers for the GIGABYTE card and the latest drivers for the ZOTAC cards. Sadly driver update clashes and reviews are unavoidable as we believe in giving you up-todate performance where possible. It seems the new NVIDIA drivers handle tesselation much better than the older driver set but occassionally at the cost of FPS in some games. 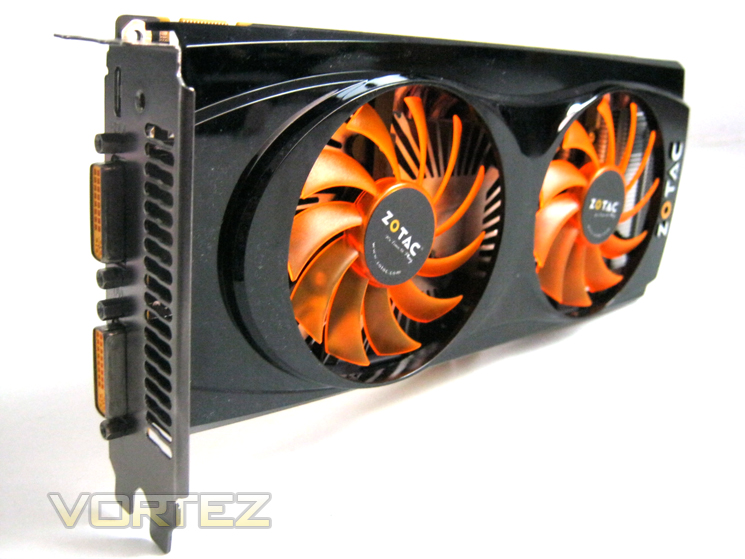 Priced at around the £167 mark, it is less the £20 more expensive that a stock GTX560. The cost of the included game would be more than this so when you factor in this card is also pre-overclocked it presents itself as quite a bargain. It is also easy to imagine enthusiasts taking advantage of this by pairing two together instead of buying a single, high end card costing well over £300. To that end we also evaluated the SLI performance and for the most part, we were impressed by the improvements two of these pre-overclocked mid-range cards made. Scaling was very good, especially at lower resolutions as it kept pace, occasionally beating the cream of single core high end GPU's that cost substantially more.

The one potential problem I see with this card is the measly 1GB of GDDR5. With high resolution setups rapidly becoming the norm (1920x1080 is now the most common according to Steam), GPU memory size will become much more important than it has in the past, especially if you like applying the gloss to a game. At 2560x1600, the card began to struggle somewhat and when AA was applied, this only served to make matters worse. While the games were still playable (Metro 2033 excepted), it was clear the lack of VRAM was having an effect on the card by bottle necking the GPU performance. It is however, unlikely that you will pair a 30" screen and a mid-range graphics card so perhaps it is a little unfair of me to mark the card down too much due to the lack of VRAM as this aside, the card performed extremely well at lower resolutions throughout our suite of benchmarks.

So to round up, the card looks superb, performs great (at lower resolutions) and is priced competitively. Were it to have an additional GB of GDDR5 this card should be put on every budget conscious gamers 'buy now' list. Also the cards cooler, while looking great is perhaps not the most efficient at either heat dissipation or noise abatement. Because of this, I cannot justify giving the card one of our top awards on this occasion. If you can live with the noise though and don't intend on gaming at massive resolutions with all the trimmings applied, I can see no reason not to recommend the ZOTAC GTX560 1GB AMP! and for this reason it puts claim to our Bronze Award.

Thanks to ZOTAC for providing todays review sample.