Dual GPU cards have been around for a very long time since the days of the 3DFX Voodoo and ATIs Rage Fury Maxx but it was Nvidia that more recently popularised the design with their 7900GX2. Their inherent problems were of course heat, power consumption and reliably installing two GPUs on a limited real estate. Initially, Nvidia had to resort to using separate PCBs but the recent trend has been to package both GPUs on a single PCB. The problems of heat and power consumption still remain limiting factors and this is why Nvidia have taken the approach of reducing the specifications of the GPUs to accommodate the TDP and thermal output of the card.

Nvidia and AMD have taken different approaches to what their dual GPU cards represent. On the one hand, AMD rely on them for their most high end offering allowing them to focus on smaller, more efficient GPUs such that two can be placed onto one card without any significant tweaking. In essence, it works the same as crossfiring two cards without requiring the need of a compliant motherboard. Nvidias philosophy has always been to create the most powerful single GPU but often they have failed to compete with AMDs dual GPU offerings (HD4870x2 vs. GTX285 or HD5970 vs. GTX480). Their recent achievement of being able to reduce power consumption and heat output of their tweaked Fermi based GF110 GPU has meant that Nvidia were once again able to pair two of them up for unmatched performance and to combat AMDs HD6990. Afterall the GF110 GPU had already made the GTX580 the most powerful single GPU card on the market so having a graphics card with two of them on-board is recipe for success surely. And thus was born the GTX590. 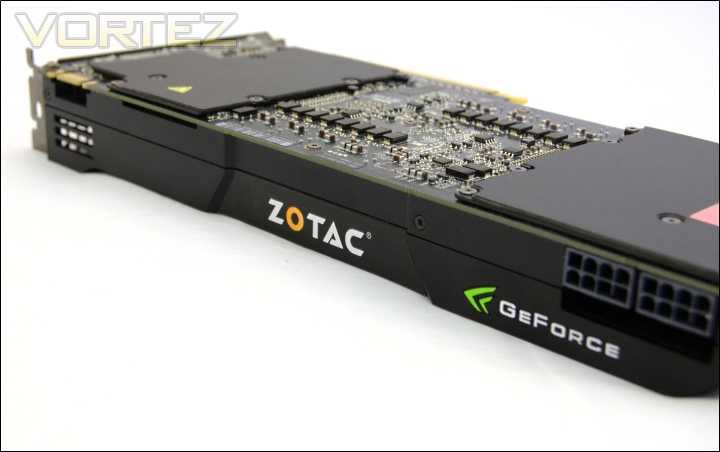 Despite the use of the tweaked and more efficient GF110 derivative, it still remains a power hungry GPU by most standards so Nvidia had to make a few sacrifices when implementing them onto the GTX590. Thankfully the core architecture was untouched and all 512 CUDA cores are present on each to give the card a total of 1024 cores. Similarly, the number of texture units on each core has remained intact at 64. The graphics cards boasts two memory subsystems linked to each core featuring the same 1536MB framebuffer and 384-bit bus as found on the GTX580. The only sacrifice Nvidia had to make was on the core and memory clocks in a bit to fit below the 375W TDP envelope. As such, the GPUs come clocked at 607/3414MHz rather than 772/4004MHz. On initial impressions, it doesnt seem a bad trade-off, after all users can simply overclock their cards to compensate for the lowered clocks. However this is where Nvidia have had severe shortcomings. To limit the TDP, they have had to lower the core voltage to a mere 0.925V from 1V on the GTX580. The result is hampered overclocking headroom. Soon after release, there were increasing number of claims that GTX590s were failing spectacularly in response to overvolting and thus Nvidia were forced to implement an overvoltage lock through new driver releases to ensure none of those problems. Our review today will look at whether this limitation will have significant repercussions on the cards performance or whether it can still dominate the competition as Nvidia has promised.

A bit about ZOTAC

ZOTAC International is one of the largest producers of NVIDIA VGA and motherboard solutions worldwide.

ZOTAC International (MCO) Limited was established in 2006 with a mission to deliver superb, high quality NVIDIA graphic solutions to the industry. It has strong backing from its parent group, PC Partner Ltd. - with headquarters in Hong Kong, factories in mainland China and regional sales offices in North America, Europe, and the Asia Pacific region. The scale of support ZOTAC provides is currently unrivalled in the world. With 40 surface mount technology (SMT) manufacturing lines, 6,000 workers and a production facility with over 9,000,000 square feet, ZOTAC employs a full array of state-of-the-art technologies and skilled personnel in order to meet your hardware needs. In addition, ZOTAC has over 130 research & development professionals in Hong Kong and mainland China, working to bring you the best from the cutting edge of the industry. ZOTAC's international bases of operation work together to enable effective and efficient global as well as localized sales and marketing support.

ZOTAC's unwavering commitment to our users is to bring the latest products quickly to the market with the best value. Needless to say ZOTAC is the right choice for those who demand the highest quality graphics solutions.

For more about ZOTAC's philosophy, click here...
Our card today is a reference design by Zotac so lets see how it fares.