AMD expects to improve their line of Bulldozer based products on a year by year basis of around 10-15% till 2014. With codenames 'Piledriver, Steamroller and Excavator' AMD hope to up performance by 50% including IPC (instructions per clock) and power efficiency. As it stands, Zambezi, the just launched product of the FX-8150 genus, has been greeted mostly by contempt. Plagued by delays and over four years in the making, the current release is seen as being hot and power hungry when overclocked while delivering below par performance. Still some may argue that Zambezi is ideal in task specific applications. 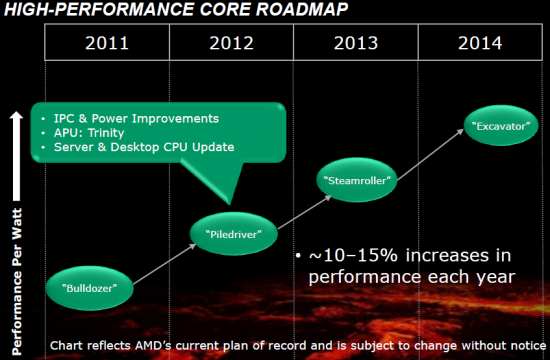 This news, (subject to change at anytime) still does not resound much good news as Bulldozer promised better IPC, better power use, faster speeds and moar cores (The latter two, arguably, AMD did deliver). As Bulldozer stands, it is largely out performed by previous generation Phenom 2 x6 CPUs and come 2014 Intel will have 14nm Haswell CPUs that are likely to continue Intels trend of CPU performance increases. While AMD are doing well in the mainstream sector with Llano APUs, their enthusiast sector may remain sour for some time to come.

There are currently 823 user(s) online:
Google