In September we reported on a leak which appeared to reveal a new AMD graphics card based on a full-fat Tonga GPU, the little brother of which resides in the R9 285 and was refreshed as Antigua Pro in the Radeon R9 380. Unfortunately the leak didn't live up to expectations; whilst the XFX cooler was new, the underlying GPU was still the same R9 380 silicon.

Today however comes a new indicator that the R9 380X is on its way. Via WCCFTech.com comes news that PowerColor have an as yet empty placeholder listing for an R9 380X, just the GPU were were expecting last month. WCCFTech.com themselves speculate that this points to a November release for the new card, although there doesn't appear to be anything concrete in that respect. 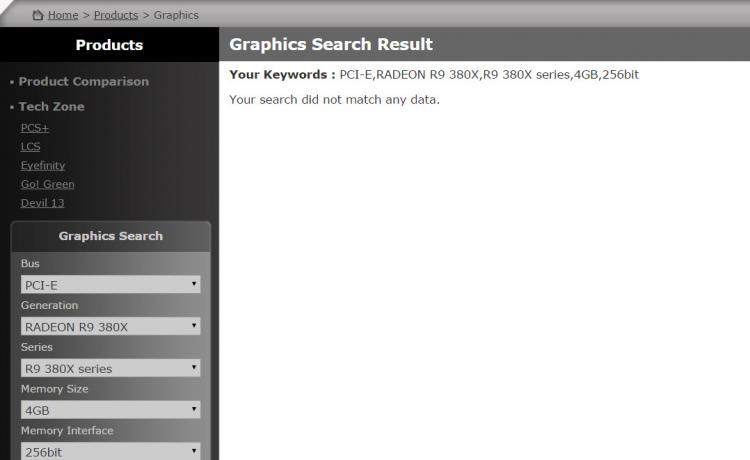 Although once again up for speculation, any R9 380X is likely to be based on either the Tonga/Antigua silicon found in the existing R9 380, or a very slimmed down variant of Grenada AKA Hawaii. Currently the Tonga XT/Antigua XT (i.e. the most complete version of this GPU) is limited to the mobile market, where it is marketed under the Radeon R9 M295X SKU. Mobile variants are based around a more beefy 2048-shader Tonga XT GPU, also featuring 128 TMUs and 32 ROPs (compared to the 112 TMUs and 28 ROPs seen on a Tonga PRO) but retaining a 256-bit memory bus.

Introducing the Tonga XT to the desktop market would be a relatively smooth process as it should be largely compatible with existing R9 380 PCBs and cooling solutions. Even power requirements will remain within roughly the same <225W envelope, keeping it at the upper end of the mainstream market. Perhaps most importantly there is a definite gap in the AMD product stack between the $199 R9 380 (Tonga PRO) and $349 R9 390 (Hawaii PRO), ample space for a Red Team GPU to go head-to-head with NVIDIA's GTX 960 4GB at ~$260.