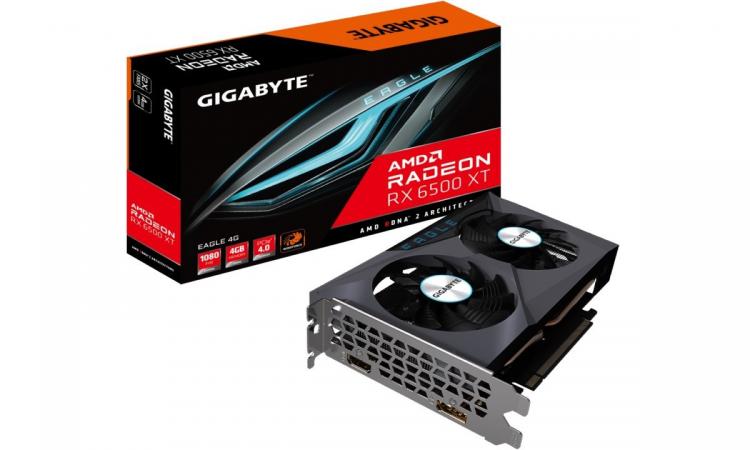 During CES 2022 AMD announced the Radeon RX 6500 XT, their latest mainstream discrete graphics card and one based on their RDNA architecture. Unfortunately it's since become clear that the silicon's capabilities have been cut-down significantly to make it cheaper to produce. No AV1 encode/decode, no h.264/5 encode, only support for four PCI-Express lanes... well, at least it would be cheap; an SEP/MSRP of $199 could be at least palatable given the state of today's market.

Last week initial reports on street pricing for the upcoming GPU pegged the cards at 300-350 after a press release from ASUS announced the MSRP of their TUF GAMING and DUAL RX 6500 XT SKUs. ASUS usually occupy the upper pricing bands of a particular GPU family, so there was some hope that we might see a few models get at least close to AMD's MSRP.

Sadly hope is now draining away as retail pricing from other manufacturers begins to leak out. The latest, from French retailer PC21.fr and sourced by @momomo_us, indicates that the GIGABYTE RX6500 XT EAGLE will reach etailers at a price of 351 inc. V.A.T., over 140 euros on top of a straight after-V.A.T. conversion of AMD's US Dollar MSRP. Another etailer, Achatnet, lists the same card for an eye-watering 371.44.

The prices are all the more concerning because the GIGABYTE's Eagle models have typically been their entry-level SKU for recent GPU families, including the RX 6600 and 6600 XT. It's looking increasingly likely that 350 will be on the cheaper end of the spectrum when (or if) retailers start shipping on January 19th.

Significant question-marks over the expected performance of this graphics card will make waiting for trusted launch-day reviews all the more important. If you already own a functioning system for gaming it would be sensible to double-check that the card will indeed be an upgrade over your current setup, particularly if you're running an NVIDIA 10-series/AMD RX 500-series or better GPU and a platform limited to PCIe 3.0.