In a little less than two months AMD's groundbreaking 3rd Generation Ryzen 3000-series CPUs will have been with us for a year, a year of ballooning core counts and the debut of PCI-Express 4.0. Spring will at the very least see the release of entry-level Zen 2 CPUs and the B550 motherboard platform, and 4000-series APUs are heavily rumoured to be on the cards. But these might not be the only hardware launches announced before the season gives way to Summer.

The previous cadence of major Ryzen platform updates staggered each major release roughly every thirteen months, although that's averaging across only three data points. Furthermore, a mainstream platform update ahead of the all-important 'back to school' period is almost expected, particularly to give a fresh lick of paint (and some marketing oomph) to the enthusiast end of the range which now has keener competition. Zen 3 is anticipated to be arrive in late 2020/21, and so a Zen 2 refresh - perhaps manufactured on a slightly more mature 7nm process - has always been a possibility and now appears to be highly likely. 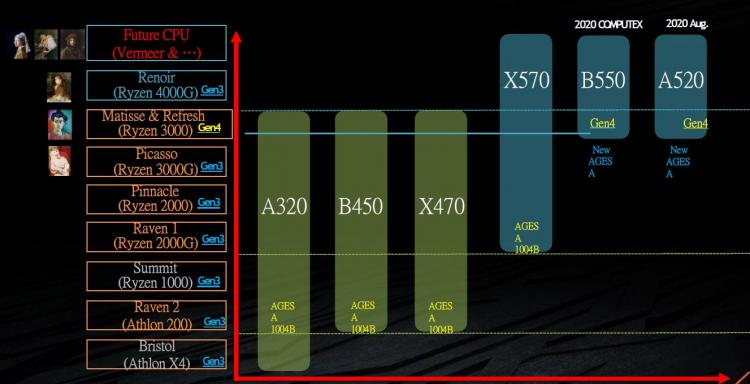 Two fresh rumours have surfaced of a refreshed enthusiast range this past week. The first ropes in a press slide one of AMD's motherboard partners outlining CPU support that mentions "Matisse & Refresh", Matisse being the codename of 3rd Gen. Ryzen 3000-series CPUs. This was later accompanied by a tweet from Twitter user and repeat leaker @9550pro stating two new AMD SKUs: the 3750X and 3850X. 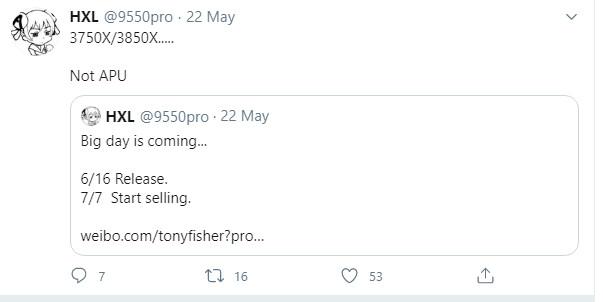 Just a day later WCCFTech contradicted those rumours a little. They agree that refreshed Matisse CPUs are planned, but that the nomenclature used will be 3900XT/3800XT/3600XT for the 12, 8 and 6-core refreshes respectively. It would be the first time the 'XT' suffix has been present on an AMD CPU product, but they are currently a part of Radeon's performance GPU naming scheme as seen in the Radeon RX 5700XT. Furthermore, the 'XT' suffix has a storied history within the Radeon graphics brand. 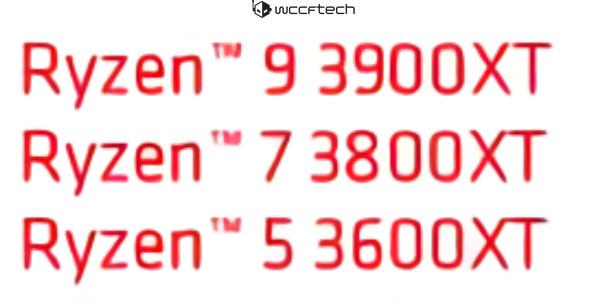 WCCFTech go on to state that these CPUs will utilise an optimised 7nm manufacturing process, and as a result higher operating clockspeeds and more robust dynamic overclocking than their older siblings. They have embedded the above product names in an image with the typical AMD standardised font, but there's little in the way of concrete evidence being offered.

Aspects which both reports agree on are the announcement and launch dates of the new chips. They should be unveiled on June 16th alongside B550 motherboard retail availability, and arrive on store shelves on July 7th exactly one year on from the first 3rd Gen. Ryzen 3000-series processors.

Rumours like these should always be taken with a pinch of salt, particularly when they contradict in even apparently minor ways. We'd lean towards the latter of the two if pushed, if only because refreshing both the 3700X and 3800X would be redundant at this point.