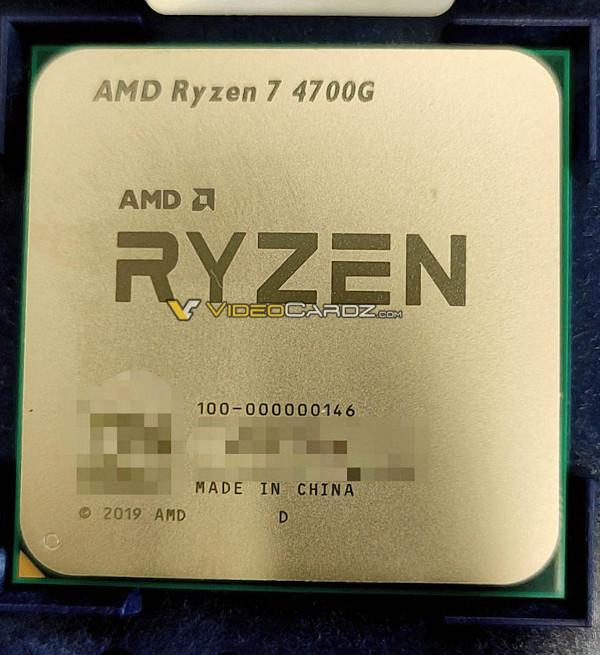 Following the launch of their B550 chipset in June AMD processor range will have a gaping void previously occupied by their desktop APU lineup. Unlike X570, B550 will not support current 3000G-series APUs based on the Zen+ architecture; the recently released Ryzen 3 3100 and 3300X will be taking their place at the entry level, but neither support on-board graphics for the most affordable desktop solution possible. It appears however that the time between B550's launch and compatible desktop APU's being available will be shorter than it seemed at first glance.

AMD of course have 4000H-series Ryzen Mobile APUs available in the mobile space today, and in theory these designs can be adapted to a socketed AM4 solution. They would have as many as eight physical cores (with SMT) and integrated Vega graphics within a single die, eschewing the chiplet style of today's Zen 2 CPUs. However, with demand probably strong for the new generation of Ryzen-powered laptops, supply of this silicon might be a little constrained.

Despite that, a new image leaked by Videocardz.com shows one of these potential consumer desktop APUs. Identified as the Ryzen 7 4700G, it's an 8-core part that's likely a socketed variant of the 4700H. This chip would have twice the number of cores and threads as the prior generation's best, greatly increasing the part's horsepower for everyday tasks (including gaming).

An earlier comprehensive technical specifications leak indicated that this APU has only 8 Compute Units (the basic building blocks of its graphics processor component), three less than the 3400G. However it would also be clocked at 2GHz rather than 1400MHz, in addition to being a slight architectural tweak over the prior Gen's graphics.

A peak core clock speed of 4.4GHz is unlikely to make it a match for Intel's Core i7-10700, their most comparable 10th-Gen SKU. But perhaps more fascinating will be direct comparisons with AMD's own 8-core CPU lineup, and whether there is a major performance difference between the monolithic and chiplet implementation of Zen 2.

No launch date for these CPUs has been officially unveiled by AMD. We expect them to be available prior to the September 'back to school' period at the latest, but a release slightly staggered from B550 - i.e. July - makes most sense. Hopefully a date will be revealed prior to B550's availability to keep consumers fully informed.