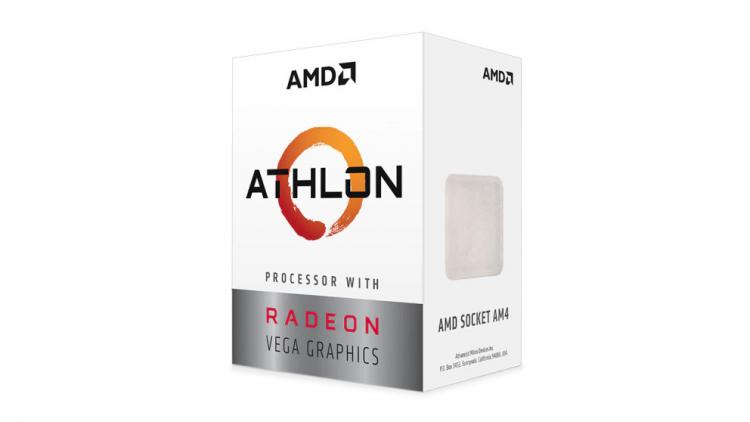 AMD announced the Athlon 3000G two weeks ago alongside it more illustrious siblings: the Ryzen 3950X and the first 7nm Threadripper CPUs. A dual-core, quad-thread APU, it sits at a very budget price point and ostensibly replaces the Athlon 200GE as an entry-level APU for the AM4 ecosystem. Today, ahead of those 3950X and Threadripper chips, it's available at retailers.

Rather than a brand new 7nm APU, AMD's Athlon 3000G 'Picasso' is based on a design similar to the Athlon 200GE 'Raven Ridge' that launched in September 2018. The design utilises the revised Zen+ architecture manufactured on TSMC's 12nm lithography, and is a single chip APU with two active cores supporting four threads via Simultaneous Multithreading. It's therefore a step down from the Ryzen 3 3200G, and at $49 is priced accordingly.

Similarities to the 200GE continue with the inclusion of RX Vega 3 class graphics. Incorporating three Compute Units, it has modest gaming potential at best but could surprise you if you keep expectations correspondingly low.

Differentiating the APU from the 200GE are the core and GPU frequencies, which have received a healthy 300MHz and 100MHz increase respectively and now also support overclocking for improved user-configured core and memory speeds. Default memory support remains at DDR4-2667.

Overclocking support is a major selling point for the processor at this end of the budget spectrum, and AMD have leaned into that advantage by offering a robust boxed CPU cooler rated at 65W rather than the APU's 35W reference TDP envelope. AMD believe that the processor, when paired with a suitable AM4 motherboard, can reasonably be expected to reach 3.9GHz with some minor tweaking.

The Athlon 3000G is perhaps most suited to budget desktop productivity and gaming use cases, particularly if paired with an inexpensive discrete GPU. At the time of writing the Athlon 3000G wasn't listed at major UK etailers but should be on sale very soon. As a result we don't currently have UK pricing.