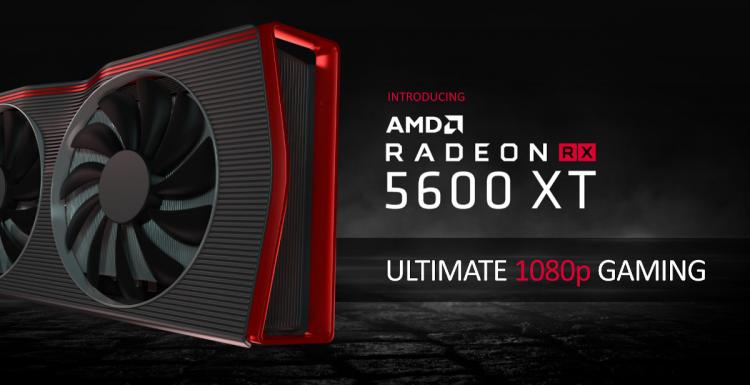 At CES 2020 earlier this month AMD announced a trio of upcoming products that strengthen their range of consumer and enthusiast hardware components, and the launch of one critical class is scheduled for right now. Today sees worldwide availability begin for the Radeon RX 5600 XT, a new GPU which plugs the price/performance gap in AMD's Navi-based 7nm range and takes the fight to NVIDIA's mainstream Geforce GTX lineup. 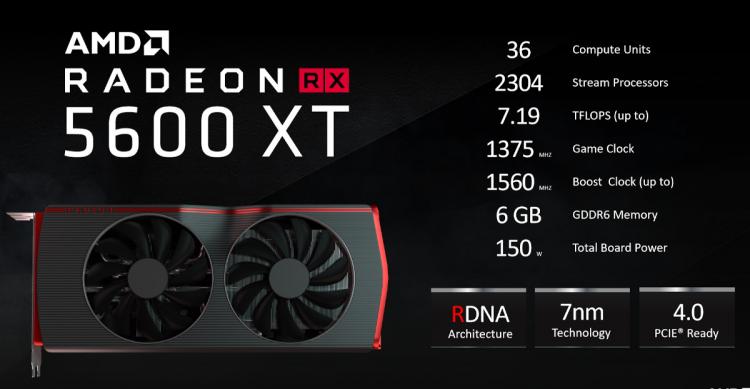 The Radeon RX 5600 XT is just the latest family of graphics cards based on the nascent RDNA architecture and manufactured using TSMC's 7nm FinFET process. As such, it's a considerable improvement to both performance and power efficiency compared with Polaris GPUs (AKA the RX 400- and 500-series) and will support a host of technologies unsupported by older GCN architectures. This particular card ostensibly replaces the Radeon RX 590 in AMD's lineup as the top-rated card for 1080p gaming, and it bolsters performance in this category in a manner that represents a true generational leap.

AMD's approach to tailoring this card to a market segment has been based on a recognition that older 1080p 'sweet spot' GPUs are struggling to maintain the 60fps standard even in games of a similar vintage. They take aim squarely at the GTX 1060, but by the same token the RX 580 should likely be criticised as past its best. The RX 5600 XT should therefore be achieving consistent fps >60fps in triple-A games and >90fps in competitive shooters (Fortnite, Apex Legends etc.) at 1080p with High to Ultra settings, and be an ideal upgrade from these cards. 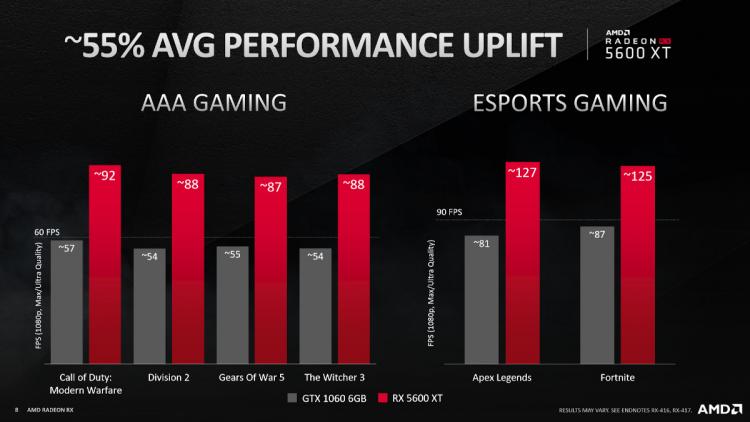 Of course, NVIDIA's equivalent hardware has been available for some time. The GeForce GTX 1660 Ti is the top-end non-RTX hardware available on their Turing architecture at an MSRP of $279, and will prove to be strong and entrenched competition for AMD's new silicon. A clear performance lead will be necessary to sway those away from their competitors, especially so long after the usual for system upgrades (i.e. new school years and new CPU platform launch windows).

Bolstering the RX 5600 XT's chances is support for AMD's burgeoning range of technologies that complement the already widely-adopted FreeSync display standard. These include Radeon Chill, Radeon Boost and Radeon Image Sharpening; plus AMD have a strong tradition of grandfathering in support for new technologies into both old and new architectures if at all possible.

For our take on the RX 5600 XT's performance check out our video review. The written review will follow soon

The RX 5600 XT's underlying silicon is AMD's Navi 10 GPU, the same as that found in the RX 5700-series. As a so-called 'salvaged' chip certain components have been fused off, reducing its performance potential compared with the more fully equipped RX 5700 chips but making any given production run more efficient (as more chips can find a home). The results are clear when comparing specifications between the chips:

Unsurprisingly the specs show more in common with the 5700-series than the 5500-series. The RX 5600 XT has the same number of active Compute Units as the RX 5700, but a slightly lower factory Game and Boost clock. A far more significant difference however shows itself in the memory subsystem, which has narrowed the bus to 192-bits and frame buffer size to 6GB. Although adequate for 1080p Ultra gaming, it may mean that the GPU struggles somewhat at 1440p and higher resolutions when compared to its nearest sibling.

Like other members of the RX 5000-series AMD have opted to support PCIe 4.0 as well as the older 3.0 standard on this card, and GDDR6 memory for higher memory bandwidth. While not strictly speaking 'future-proofing' - it will be some time before mainstream cards saturate even the PCIe 3.0 x16 bus - it does mean that these designs aren't being relegated to second-class status.

Reference TDPs have been set at 150W, likely mandating a good quality PSU at or above 450W before any overclocking is attempted. Most models that adhere to the reference specification will utilise one 8-pin PCIe power connector, but certain factory overclock SKUs will be equipped with one 8-pin and one 6-pin connector. No special case cooling considerations are likely necessary beyond a modest air flow.

It was reported late last week that AMD had released an updated vBIOS to manufacturers and reviewers meaningfully changing the minimum specifications of certain OC models. Many of the reviews going live today will be of cards leveraging this updated specification, which may not be representative of reference 'non-OC' models, while the first batch of retail samples will need an end-user update applied. The following is AMD's statement on the matter:

Based on ongoing testing with our board partners, we have raised the GPU core and memory frequencies for overclocked Radeon RX 5600 XT SKUs to take advantage of increased thermal and electrical headroom built into partners custom designs. The updated VBIOS has been made available to our board partners for inclusion in select OC SKUs at launch. AMD is dedicated to disrupting the market with industry-leading compute products, and the new VBIOS makes the Radeon RX 5600 XT an even more powerful contender for high-performance 1080p gaming. Previously announced product specs are unchanged, as they remain AMDs recommended reference design specs.

The vBIOS update increased GPU Game and Boost clocks to 1615MHz and 1750MHz respectively and memory speed to 14Gbps, also nudging the TDP north to 160W. The positive performance impact of these changes is likely to be greater than 10%, and so in the launch window extreme care must be taken by customers to ensure that they purchase a madel reflecting the updated OC specification.

AMD have provided a list of locations for downloading updated vBIOS builds that should indicated supported models. Retail stock should gradually be replaced with properly updated units over time.

We're not entirely sure why AMD believe this move is acceptable in the consumer market. Even more so than the stressful process of updating motherboard BIOSes, updating a video card vBIOS is often non-trivial and fraught with risk. Expecting non-enthusiast end-users to address this aspect of the card seems unwise at best, and would be enough to justify steering many away from this launch at least one day one. 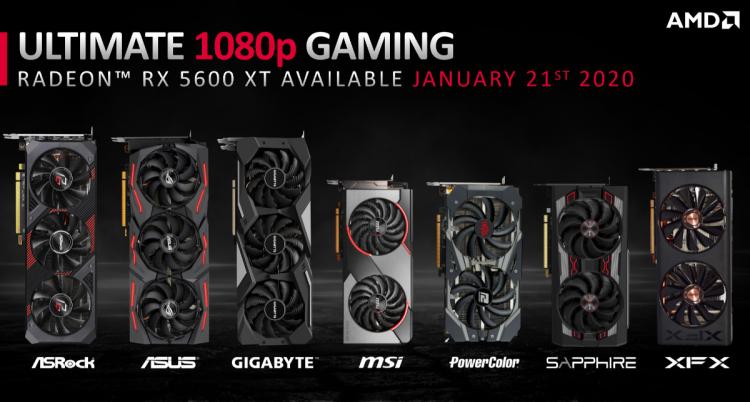 Ahead of this release NVIDIA updated the pricing of the RTX 2060, their entrypoint into the GeForce RTX ecosystem, to $299. This will put considerable pressure on any debutant RX 5600 XT priced at a premium above its MSRP.

As mentioned, AMD's Radeon RX 5600 XT starts at an MSRP of $279, which roughly equates to £257 in the UK (after VAT @20% is applied). The Sapphire Radeon RX 5600 XT PULSE we've reviewed for this launch is for sale from OCUK and SCAN.co.uk for £254.99. Pricing will vary considerably by brand and model however, with some premium designs being considerably more.

In common with the RX 5500 XT, this GPU will not be available in an AMD reference model; only partner designs with proprietary cooling solutions and custom PCBs will be sold through retail channels. This is unlikely to be much of a detriment given prevailing attitudes towards AMD's blower coolers and less necessity for water cooling support.