Just a couple of days after EVGA showed us more details on their dual-GPU card we assumed to be the GTX 590, Galaxy have followed suit and released images of their own dual-GPU card. The card, like the EVGA version, is based on two GF104 GPU cores, the very same found in Nvidia's now superseded GTX 460.

Galaxy have not shown the card with a cooler, but it is said to be a triple fan solution. 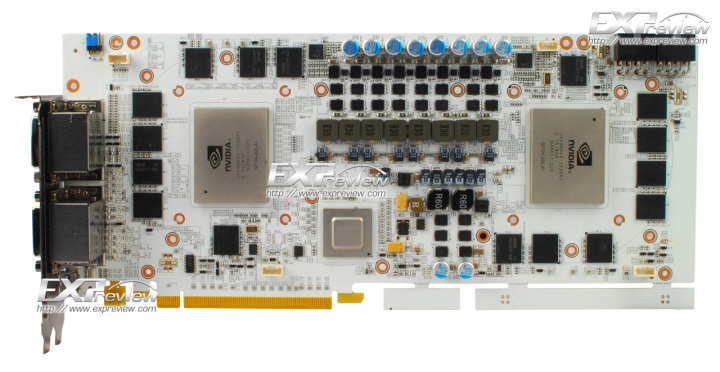 Here you can see the upper side of the PCB, with the two GF104 cores. Note how Galaxy are not using the out of supply nForce 200 bridge chip. If this card and EVGA's version are successful, we may see more dual-GPU cards from other manufacturers in the future. The card sports an 8+2 power phase and 1GB of GDDR5 RAM per GPU with a 256-bit memory interface. There are no available clock speeds at this stage, though expect the core to be close to the 700MHz seen in the EVGA version.

The bottom of the PCB shows 4 memory chips

Galaxy have kitted out this card with Tantalum capacitors too, for best performance. It's clear this is a no-nonsense high end offering. 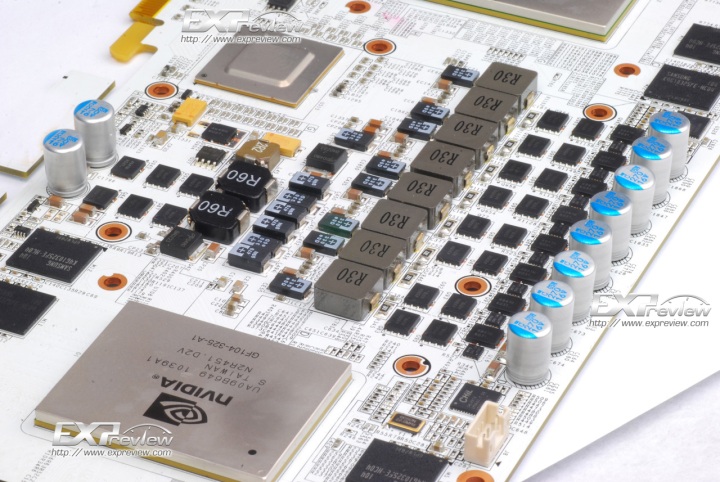 The image above shows one of the GF104 cores (bottom left) and an, as yet, unnamed SLI bridge chip (top left). In the middle is the 8+2 power phase.

An exciting bit of information also given is the possibility of a GTX 560 Ti dual-GPU card to appear later. The GTX 560 Ti offered a very pleasing boost over the GTX 460, meaning a dual-GPU version may be a brilliant performer. Be sure we'll have all the developments as they happen.

What do you think about Galaxy's version of the dual-GPU GTX 460? Share your comments in the forums!