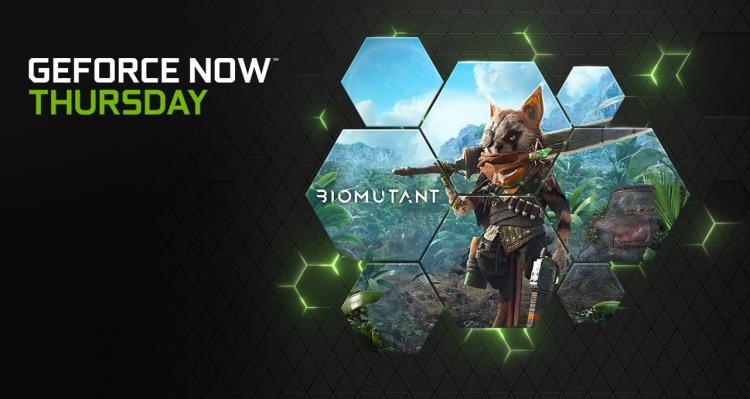 GFN Thursday returns this week with some relatively low-key updates to NVIDIA's GeForce NOW cloud-based game streaming service, a quiet refrain of more significant announcements the day before yesterday. Subscribers to the service will nonetheless no-doubt be eager to hear of new titles arriving this month, ready for play on even low-end devices through the GeForce NOW app on PC, Mac or Chromebook.

Biomutant is an action-RPG described as a 'kung-fu fable' from Experiment 101 (who count among there number former employees of Avalanche Studios) and published by THQ Nordic that's slowly gaining recognition as one to watch amongst the torrent launching in the next six weeks. The graphics and world setting look stunning in trailers, while the character customisation, weapon variety and crafting system hint at a rich and complex experience. Stunning image quality however tends to go hand-in-hand with a need for GPU horsepower which may push it beyond the capabilities of some personal systems; thankfully GeForce NOW is there to step into the breach. It will be released on PC (via Steam) on May 25th, and be available to play on GeForce NOW once purchased.

But that's not all. Fifteen games are joining or returning to GeForce NOW this very week as part of a catalogue that numbers well into the hundreds. Once purchased, any and all can be played through the cloud on hardware that's equivalent to a high-performance gaming PC with RTX technologies unlocked where applicable.

NVIDIA have also updated Broadcast, a streaming software suite utility for those who play locally but broadcast globally via Twitch, Youtube or other platform. New features include better microphone audio isolation, video de-noising, and greater flexibility for video effects and overlays, and they're discussed in the video below.

More information on Broadcast 1.2 is available at the official blog post. The software is compatible with the entirety of NVIDIA RTX GPUs from the 20- and 30-series, as well as Quadro RTX and Titan RTX hardware. It requires NVIDIA Studio Driver 462.46 or Game Ready Driver 465.89 (or a more recent update) for full functionality.