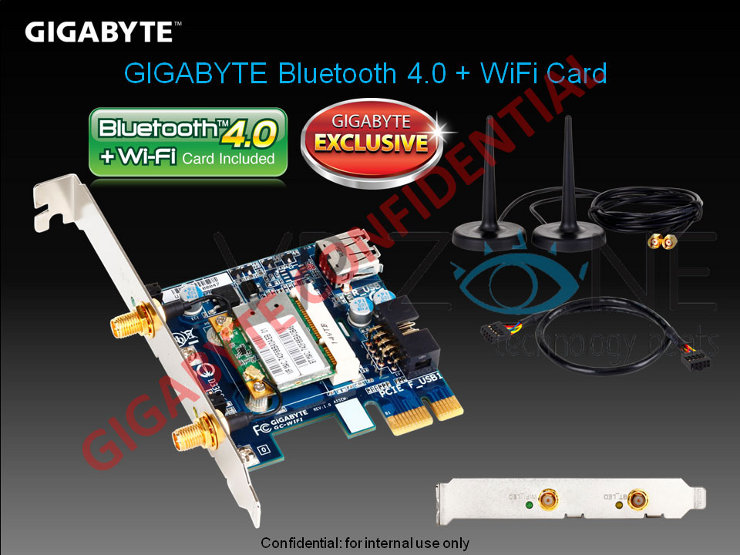 GIGABYTE's X79 release range appears to be coming together nicely, as shown by the recent vanity gallery of their boards and some discussion of their features over the past couple of weeks. One weakness which they appear to have identified with respect to off-the-shelf board features compared to competitors however was the lack of built-in Wireless Networking and Bluetooth, especially on their high-end boards.

Seeking to rectify this, GIGABYTE have put together a small PCIE 1x expansion card. The card, given the moniker 'GC-WIFI', is a simple Mini PCIE-to-PCIE adapter with built-in Atheros Wireless-N card and USB Bluetooth 4.0 bolted on to the rear. The implementation is simple and cheap if not particularly elegant: Wireless-N functionality acts like a PCIE wireless network card; however Bluetooth 4.0 function requires that the card be plugged into a USB 2.0 header on the motherboard. Due to the design GC-WIFI will only be capable of 150Mbps, well short of the 300Mbps required for MIMO. GIGABYTE are apparently seeking to develop a more elegant solution for later revisions.

GC-WIFI should ship with X79-UD5, UD7 and G1.Assassin 2 whilst not adding to consumer outlay. The UD5 and G1.Assassin 2 will both be limited to 2*SLi with the card installed due to the layout of their expansion slots - ironically the UD4 would be ideal for 3-Way SLi and GC-WIFI in layout terms. There's no news on stand-alone retail of the GC-WIFI; as compact a solution as it is, GIGABYTE will probably want to iterate on it further before releasing it as retail product.