Intel's 10th Generation Core CPUs will arrive in the mainstream desktop market in the very near future, headed by a new flagship billed as the 'World's Fastest Gaming CPU'. But despite this bold claim and the expectations of legions of enthusiasts, Intel continue to withhold detailed information about this platform update as a whole.

The 10th Generation roll-out began in Autumn 2019 with notebook and workstation-class processors that, with few exceptions, represented more of a price correction in Intel's product stack than introduction of new technologies. It also didn't introduce new mainstream desktop processors, instead relying on the increasingly beleaguered 9th Generation Coffee Lake range to fight a rearguard-action against a resurgent AMD and their 3rd Generation Ryzen platform. While OEM system sales continue to be Intel's bread and butter, individual component and DIY systems increasingly favour their competition.

As a new platform intended to take up that battle, the 10th Gen appears to be well positioned. More cores at the high end and better bang for your buck throughout the stack will hit AMD's traditional strengths, and niche features should interest enthusiasts in particular. That said, while the new flagship might be the fastest chip for gaming, the launch has all the air of a stop-gap until architectural changes can be integrated into a new processor line.

Just three years ago Intel's mainstream desktop lineup was headed by the 4-core, 8-thread 7th Generation 'Kaby Lake' i7-7700K. Higher performance - and particularly a higher core/thread count - was only available through the premium HEDT line. What a turn around we've seen.

Intel's 10th Generation will be headed by the 'Comet Lake' i9-10900K, a 10-core/20-thread CPU behemoth that builds on rather than reinvents the Coffee Lake processors of the 8th and 9th Generations. Very little changes under the hood in terms of process and architecture; instead, Intel for now are sticking with a monolithic die design and relying on a further optimised 14nm lithography to maintain clock speed leadership.

Nonetheless, the i9-10900K claims an astounding headline maximum operating frequency of 5.3 GHz, even higher than the 5 GHz boost mode of the 8-core i9-9900KS. To support the additional cores this chip has 20MB of Smartcache, 4MB more than the 9900K/KS. An revised memory controller means it will support faster memory as standard, now up to DDR4-2933 compared to DDR4-2666 throughout the 9th Gen. Overall Intel project that this processor is up to 33% faster in gaming than the previous generation, and will enjoy low double-digit improvements overall.

Without a change to the underlying manufacturing process however these improvements have to come from somewhere, and a quick glance down the product stack quickly identifies the culprit: TDP. The listed TDP on all unlocked 10th Gen 'K' processors is now 125W, up from 95W. Official figures such as these have low-balled actual power draw in the past, and so the 'real' power consumption might be far higher.

If that sounds familiar, it should. AMD relied on the same tactic to bolster the performance of their Bulldozer processors, often to comical degrees. On the other hand, it is almost astonishing that a Core Architecture fundamentally similar to Skylake can be scaled to this degree on the same process node. Detailed reviews will uncover to what extent Intel needed to juice their CPUs to remain competitive.

Intel's flagship Comet Lake CPU is very much designed as a chip for enthusiasts of both overclocking and gaming, and incorporates a number of advancements in pursuit of that goal.

On the manufacturing side, a Comet Lake processor die is thinner than its Coffee Lake counterpart. This will in turn aid in heat transfer to the integrated copper heat spreader (IHS) and hence overall thermal performance. Comet Lake will also incorporate the use of solder TIM rather than the paste which was, until recently, utilised throughout the range.

Dynamic frequency overclocking is also being tweaked. Thermal Velocity Boost - widely incorporated across the new 10th Generation Workstation and Laptop chips - makes its way to the mainstream desktop as a means of opportunistically increasing frequency when the workload is appropriate and thermal headroom to do so. TVB is currently limited to boosting two cores rather than the whole array.

Thermal Velocity Boost on desktop has 70C as the upper ceiling, a higher value than mobile that's reflective of the differences in cooling solutions and practical use case. Better cooling solutions should allow the CPU to maintain TVB modes for longer, after which frequencies will step down to the appropriate Turbo mode, but wont in of themselves actually increase the TVB frequency.

Further augmenting the dynamic overclocking package of Intel Core CPUs is Turbo Boost Max Technology 3.0. The best performing cores on processors are identified, and maximum turbo modes are applied to these cores in single and dual-core turbo modes (without increasing voltage). This works hand in hand with improved Windows scheduling that can bias threads with the heaviest workloads to the best performing cores.

The utility itself has also been cleaned up with better graphics and support for these new features. Motherboard vendors can hook into the new controls offered by the API, allowing integration into their own utility software (typically shipped with the motherboard).

Hyperthreading - No Longer a 'Premium' Feature.

Since the Sandybridge era Hyperthreading - the technology that allowed Intel's CPU cores to handle two independent threads simultaneously - has been a performance feature exclusive to flagship SKUs on the mainstream desktop platform. With the 10th generation that all changes.

With the launch of the 10th Generation on desktop Hyperthreading becomes a feature present on nearly every model, from entry-level i3 up to enthusiast i9. It even makes an appearance on budget dual-core Pentium Gold models.

Multi-threaded applications and desktop use cases where multiple applications are run concurrently are increasingly common. Users of all stripes will appreciate the performance improvement this can offer.

Intels change in ethos for Hyperthreading mirrors AMD's approach to Simultaneous Multithreading in Ryzen. Ryzen SMT has always been the rule rather than the exception, and has lead to a multi-threaded performance lead even when the number of cores on comparable CPUs has been identical.

Processor SKUs with unlocked multipliers for overclocking are an important segment to Intel, representing 4-5 million units and a large proportion of the enthusiast install base. One key differentiator that AMD have exploited is this exclusivity - the feature is available across all SKUs and motherboards, rather than limited on both CPU and motherboard. Intels 10th Generation doesnt appear to change that status quo.

Unlocked multipliers remain a premium feature present only on 'K' and 'KF' SKUs, and Intel have made no mention of overclocking outside of the Z-series motherboard platform. Each of the i9, i7 and i5 brackets has one unlocked SKU: i9-10900K, i7-10700K and i5-10600K (as well as the KF variants without integrated GPU). 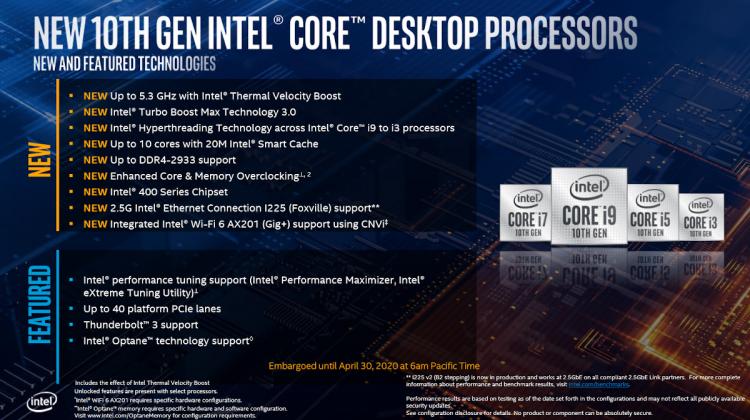 Launching alongside these CPUs will be the 400-series chipset and a new line of motherboards from manufacturing partners such as ASUS, GIGABYTE, ASROCK and MSI. However Intel are not releasing details of this aspect of the platform update today, even to the extent that official documentation makes no mention of Socket, backwards compatibility, PCI-Express support, and the available models at launch (i.e. Z490, H410 etc.). This information is being withheld until a later date, perhaps in an effort to maintain consumer engagement in the long run up to component availability.

Third party communications from Noctua last week confirmed that the 10th Generation CPU will make use of a new socket, LGA1200, which is likely to prevent backwards compatibility with 8th and 9th Generation CPUs and associated mainboards. In our view Intel shouldnt hide this fact.

Its true that the LGA1151 socket hasnt enjoyed the same level of longevity as AM4, but Intel should own this and commit to doing better by its customers in the future rather than shy away from some of the more awkward realities of their past decisions. Worse still, not communicating early could lead to confusion whereby purchasing decisions are made today in the expectation of forwards-compatibility.

Despite Intels reticence, motherboard manufacturers are previewing their Z490 designs today. Their careful choice of wording leads us to the conclusion that other models (B460, H410 etc) will be soon after Z490 and the CPUs rather than simultaneous with them.

Although not officially stated as yet, Noctua recently revealed that CPU coolers compatible with LGA115x socket processors will continue to support these processors. This ensures that a huge selection of supported coolers are available from day 1, but TDP levels for certain SKUs should be considered when selecting.

Looking at a cost per core basis, Intel are substantially revising their pricing structure for the 10th Generation Core lineup on mainstream desktop (though not quite as radically as the HEDT range). The 10-core/20-thread Core i9-10900K has an MSRP of $488, the same as the 8-core i9-9900K. The cheapest 8-core model is now almost 10% lower at $298 (and supports Hyperthreading), while the 6-core entry point is $157 (down from $182).

The most affordable unlocked CPU for enthusiasts is the 6-core/12-thread i5-10600KF at $232, which is $30 cheaper than the i5-9600KF. At launch there is no equivalent to the quad-core Core i3-9350KF, so truly price-constrained enthusiast overclockers will have to look elsewhere for a budget solution.

Intel project that owners of systems three years or older will be the largest market for their 10th Generation platform. It certainly true that upgrading from this era of technology will bring access to much higher processor speeds and core counts even when choosing more affordable options, and in many situations the upgrade costs can be offset by re-using ancillary components such as CPU cooling and DDR4 memory.

The pricing outlined however is based on listed RCP. Stock constraints caused by the continued coronavirus mitigations could significantly increase component pricing beyond MSRP, but a full picture won't be visible until retailers are able to communicate their expectations.

While the relative merits of the two processor families will be debated, this price revision makes Intel's 10th Generation more competitive with AMD's Ryzen 3000-series processors before other component purchases (namely motherboards) are factored in. Still, Intel have no counterpart to AMD's 10-core Ryzen 9 3950X outside of the HEDT market, which will warp perception in the latter's favour.

We expect that a selection of 10th Generation CPUs - including the flagship Core i9-10900K - will be available alongside Z490 motherboards on May 20th. Presupposing that more budget-friendly 400-series motherboards will debut after this date, it would make sense that entry-level to mid-range CPUs (particularly locked SKUs) will be in stores later in Q2 and Q3 2020.

More information on Intels entire 10th Generation platform update should unveiled as we approach the formal product launch, and we hope to provide you with more information and benchmarks then.