The Samsung UD590, one of the first range of 4K Adaptive Sync monitors to be released

Graphics Card hardware wasn't the only point of discussion during Jensen Huang's address as NVIDIA CES during CES. In a surprise move he announced that, after many years, NVIDIA would be supporting the VESA Adaptive Sync standard through a driver update scheduled to go live next week. That said, the announcement of support appeared to be grudging at best.

G-SYNC has been a crown jewel of NVIDIA's technology portfolio since its unveiling in October of 2013, and over that time dozens of high-end monitors supporting the technology have been released. In fact, CES 2019 will see the wraps taken off three new G-SYNC Ultimate HDR 1000 IPS panels with 4K 144Hz operation. Although the goals of the G-SYNC and Adaptive Sync technologies align - smoother tear-free frame display for gaming and other applications - implementation is starkly different.

Panels utilised in NVIDIA G-SYNC monitors undergo a rigorous testing process to ensure optimum performance, colour calibration and compatibility with their entire GPU suite. The monitor scaler is replaced with NVIDIA's proprietary G-SYNC FPGA module that not only synchronises with the graphics card GPU, but also handles panel features such as overdrive so that each frame is displayed as its intended. 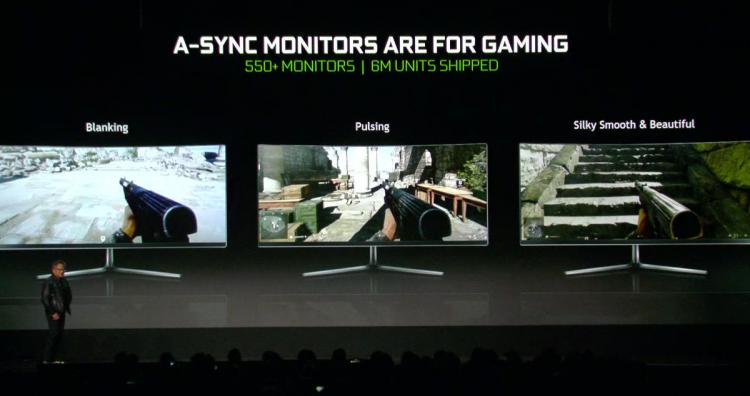 Adaptive-Sync is more of a free-for-all. Implementation is up to the monitor manufacturer, and even 'gaming' monitors don't necessarily live up to the minimum standards that NVIDIA set as an acceptable experience. In particular, NVIDIA call out Blanking (frames not being displayed leading to a blank screen) and Pulsing (frame display not synchronising with the backlight refresh) as issues rife among Adaptive-Sync panels when tested on NVIDIA GPUs; however a restrictive refresh rate range and image blurring are common missteps.

NVIDIA, along with other industry partners, was a key player in forging the VESA Adaptive-Sync standard. It was born out of the embedded DisplayPort standard, which itself was core to NVIDIA's development of G-SYNC and its early implementation in gaming laptops. They, however, deemed it to not be up to the task of mainstream gaming.

That said, this is a numbers game, and there's one number that NVIDIA can no longer ignore. Over 500 Adaptive-Sync monitor models are now available on the market and 6 million units have shipped, including a wide selection of gaming monitors, and they're particularly affordable compared to their G-SYNC brethren. Last year Microsoft announced Adaptive-Sync support, sending shockwaves through the monitor and TV marketplace. Owners had been crying out for support with their NVIDIA GPU, to no avail.

And so, NVIDIA will be supporting Adaptive-Sync through their driver stack beginning January 15th. However caveats apply. 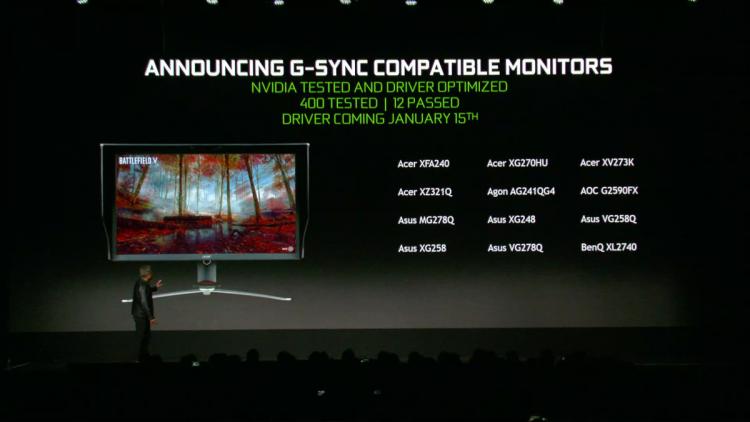 Only 12 monitors (yes, 12) out of 400 tested offered an acceptable experience, and only these will be natively supported by default and be eligible for the 'G-SYNC Supported' moniker with associate features. Around 150 more models are set to be tested in the near future, but with such a high failure rate one cannot expect many more models to pass.

That said, Jensen inferred that users will be able to optionally enable an Adaptive Sync supporting (likely still called 'G-SYNC') mode through a driver toggle. Hopefully this option will be available when the driver is rolled out next week, and the experience is still better than V-SYNC or unsynced.

As a result of this announcement, NVIDIA finally joins AMD in offering desktop Adaptive Sync support (as FreeSync), while Intel are set to support the standard with a future graphics architecture.

It's not currently known which GPU models will and will not support the new mode, but we anticipate that the majority of GeForce GTX as well as GeForce RTX series cards with Maxwell, Pascal and Turing architecture will be compatible. Kepler may be more of a stretch, but if it supports G-SYNC, it should in theory also support Adaptive-Sync.