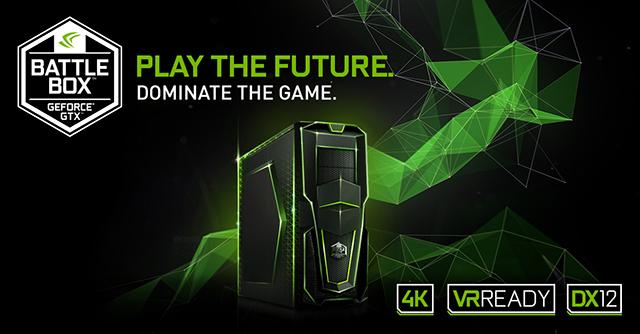 Originally launched in October 2013, NVIDIA's Battlebox initiative pushed a definitive minimum standard for performance 4K gaming on PC. NVIDIA themselves worked with independent system integrators across the EMEA region to create systems capable of these heavy requirements, as well as bring in a some much-needed NVIDIA 'bling' to the builds in the form of custom decals and lighting. Demanding a minimum of dual-GTX 780 Ti's in SLI and high-speed Haswell CPUs, they were (and continue to be) a premium option for demanding gamers.

Following last week's release of Intel's new Skylake platform, as well as Microsoft's Windows 10 operating system and NVIDIA's own GTX 980 Ti, NVIDIA have now updated the specification of Battlebox systems to reflect the new hardware landscape. Each Battlebox system is now equipped with at least one NVIDIA GTX 980 Ti as well as an unlocked Intel Skylake or Haswell-E CPU; furthermore, performance gaming is augmented through the use of SSDs capacious enough to accommodate both OS and a wide selection of games.

The updated systems are spec'd with the intention of providing the best possible performance in NVIDIA-partner titles such as Grand Theft Auto V, including far better than merely 'playable' experiences at 4K. Each is also ready for future DirectX 12 releases and the advent of VR later this year.

Battlebox systems are available in the UK from CCL Online, Overclockers UK, PC Specialist, Cyberpower, SCAN and Overclockers UK. Obviously their premium price puts them out of the range for many, but if you're in the market for a new high-performance PC they provide an excellent framework for assessing your options (or just upgrading with a minimum of fuss). Retailers have been free to change up other aspects of their own unique Battlebox, for instance choosing their preferred chassis, cooling solution and storage system; all however seek to offer absurd performance.

For more information including where to buy visit the Battlebox UK landing page, as well as NVIDIA's own breakdown of the initiative's aims.