NVIDIA's GeForce GTX 16-Series Gets Its Own SUPER Update 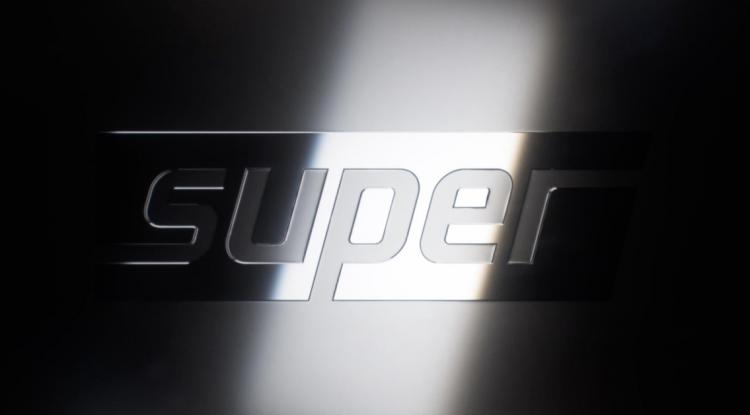 In July NVIDIA announced the GeForce RTX 20 SUPER-series, a mid-stream update to the RTX 20-series that slightly tweaked their product stack and increased the number of available performance bands occupying price points above £300. Today the GeForce GTX 16-series gets the SUPER treatment with the GeForce GTX 1660 SUPER's introduction, a fresh addition available below £250 and arriving in a cornucopia of partner variants from day one.

Motivating the launch of the GTX 1660 SUPER are two factors: the introduction of GDDR6 memory lower into the performance stack, and anticipated competition in the form of AMD's upcoming RX 5500-series in the near future. It's difficult to account for the latter without insider knowledge of AMD's pre-release hardware, but the former is a clear improvement over the GDDR5 memory utilised in the GTX 1660 until now. Furthermore, as we'll soon see, the new SUPER card even advances over the GTX 1660 Ti a little in this specific area.

Joining NVIDIA's lineup in November will be the GTX 1650 SUPER, which also incorporates GDDR6 in a tier previously home to GDDR5 memory only. Interestingly enough however, NVIDIA aren't claiming that their new SKUs will displace and render obsolete prior GTX 16-series cards; instead the entire range will coexist to provide a great deal of selection to consumers. Perhaps NVIDIA have learned from the experience of the RTX 20 SUPER series, which (despite replacing the original SKUs) remained on sale alongside them for months following launch.

The GTX 1660 SUPER's launch also heralds a trio of significant improvements to the driver stack including the first ever implementation of ReShade in an official release from any GPU manufacturer. There's plenty to get your teeth into today, so lets get started.

The GeForce GTX 1660 SUPER is an update to the base GTX 1660, rather than the sort of major reshuffling of GPU core and specification we saw with the RTX 20 SUPER-series' introduction. It exploits the availability of faster and more affordable GDDR6 memory to significantly improve the memory subsystem and more than justify its SUPER moniker. Now leveraging 6GB of GDDR6 operating at an effective clock speed of 14,000MHz, the memory bandwidth available to the GPU is almost doubled to 336 GB/sec. The net impact on the card's design is also negligible, necessitating a very slight increase in TDP to 125W.

Reference specifications remain otherwise identical to the base GTX 1660: 22 Shader Modules (1408 CUDA Cores), 1530MHz Base Clock, 1785MHz Boost Clock, 6GB Frame Buffer and 88 Texture Units. By the same token, it supports the advanced Turing features available to the GTX 16-series family, if not the RT and Tensor cores of the RTX 20-series. The card will sit between the GTX 1660 and 1660 Ti in an increasingly cramped mainstream that may exhibit some price fluctuation with this launch.

Speaking of the GTX 1660 Ti, the new card also leapfrogs this SKUs memory speed. The greater number of active Shader Modules on the GTX 1660 Ti should allow it to stay well clear of the GTX 1660 SUPER in the vast majority of cases, but don't be surprised if the 17% higher memory bandwidth makes it a closer comparison than you might expect.

The effect of improvements to memory bandwidth on overall real-world performance are often unpredictable in their magnitude, varying significantly from title to title and by in-game settings. NVIDIA's own in-house testing results reflect this; for example Fortnite benefits far more than Apex Legends, shown by a greater improvement to perf. from the GTX 1660. 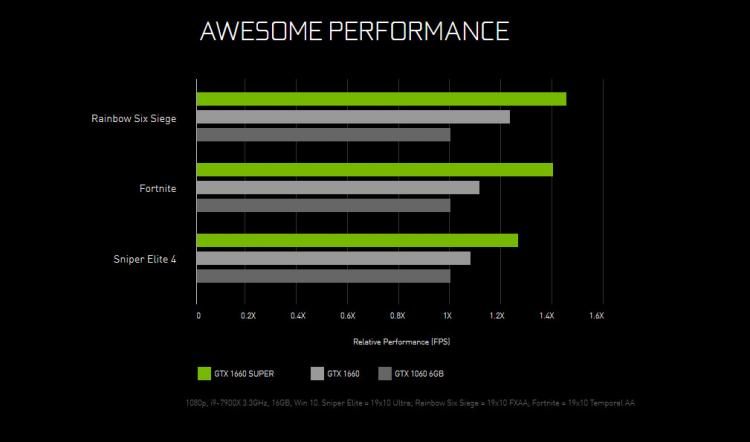 While reference specifications (apart from memory) are identical, AIB partners will be launching with their own variants of the card immediately. These will typically be overclocked, in some cases quite significantly, which could mean that the more mature silicon of the GTX 1660 SUPER will clock higher than the vanilla GTX 1660 in retail units; time will tell on that score.

NVIDIA's target market for the GTX 1660 SUPER are those seeking to upgrade from the GTX 1060 within a similar price band, rather than stepping up to the RTX 20-series. They would typically game at 1080p 60fps, and might now also be equipped with a G-SYNC Compatible/ Adaptive Sync/ FreeSync monitor for smoother frame rates up to 144Hz. Improving performance by as much as 50% over this Pascal-era GPU starts to be worth the upgrade in the eyes of many, whereas low double-digit incremental improvements are harder to justify to this budget-conscious segment. 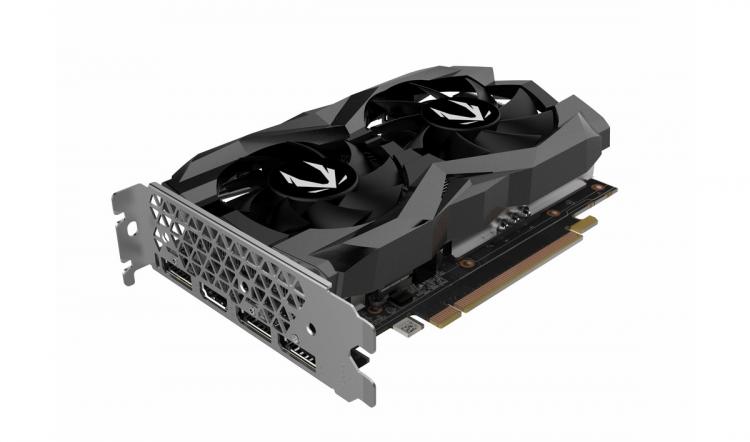 GTX 1660 SUPER graphics cards are now available priced from an MSRP of $229, but pricing will vary significantly based on partner implementations including factory overclocks and cooling solutions. The GTX 1650 SUPER will be available November 22nd, and pricing will follow at a later date.

Launching alongside the GTX 1660 SUPER is new functionality for NVIDIA's driver software. Long seen as the gold-standard for hardware/application support, process improvements from the competition have spurred innovation beyond game optimisations and hardware level features.

ReShade is a post-processing injector for games which has been developed independently from the standard APIs and hardware manufacturers. Its powerful tools can add effects such as ambient occlusion, depth of field and colour correction, and the modding community collaboratively work on new shaders tailored to specific games and aesthetic preferences. This open source mod was downloaded over 3 million times last year, a testament to its popularity in the modding community.

The drivers launching alongside the GXT 1660 SUPER today are the first to explicitly integrate ReShade support, with implementation via GeForce FreeStyle and Ansel overlays. So far as we're aware, this is the first time ReShade has been incorporated into official driver releases from any manufacturer. Hopefully ReShade is able to maintain its reputation for independence and creativity despite a new association with NVIDIA. 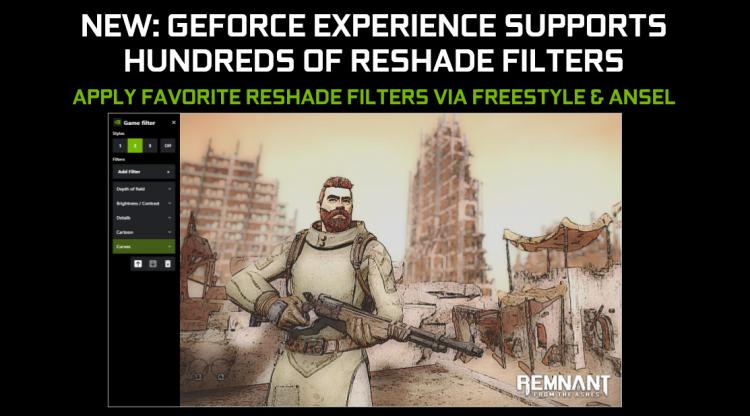 Different restrictions are placed on titles which support the Ansel super-screenshotting feature. Sixteen NVIDIA filters are available in addition to 30 official ReShade filters in an estimated 650 titles, although with access to the SDK more than 70 official ReShade filters and theoretically any custom filter is available in a subset of those titles. 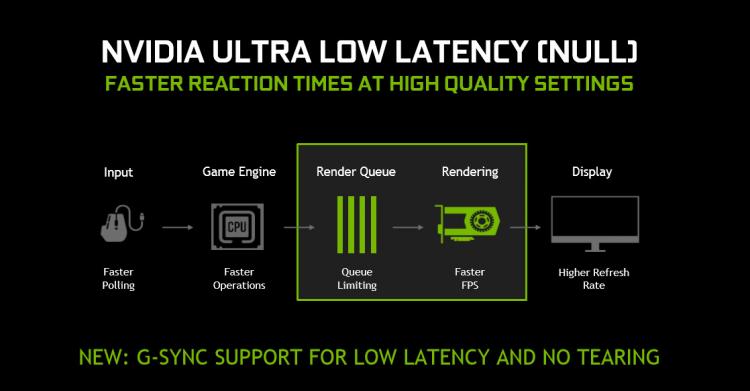 Beginning with these drivers, NVIDIA's recently released Ultra Low Latency Mode will be supported in G-SYNC for a low-latency experience without tearing. Setting Low Latency Mode in the drivers switches behaviour from one of buffered pre-rendered frames to a 'just in time' method of frame delivery to the render queue.

The impact will vary from game to game, but NVIDIA's own testing places the effect at 8-10ms less latency when V-SYNC (and G-SYNC) is disabled. Now GSYNC users will also be able to claw back these precious moments for a slightly snappier experience while also enjoying tear-free frames.

It's not often that NVIDIA play catch-up, but that was the case when AMD implemented Radeon Image Sharpening into their driver tools at the launch of the Radeon RX 5700-series. NVIDIA hit back with their own image sharpening filter available through the GeForce overlay, and today's drivers see further incremental improvements to their implementation.

Image Sharpening as a post-processing technique in NVIDIAs drivers should now be faster, alleviating one important criticism of their initial foray. Those who remain a little charry about utilising the GeForce in-game overlays can now implement it through the NVIDIA Control Panel (which also side-steps issues certain titles have with the overlay itself). It's also available on all DX 9 through 12 titles, encompassing the great majority of games released in the last 10 years.

Today's launches continue to drive NVIDIA's competitiveness in the mainstream sector, belying their own CEO's dismissiveness towards GPUs which don't incorporate hardware accelerated ray-tracing features. There are now a wide selection of GPUs in the market sitting below £250, and only NVIDIA's support nascent advanced technologies including Variable Rate Shading and now baked-in custom shaders through their driver stack.

For more information on these GPUs and associated technologies visit GeForce.com.