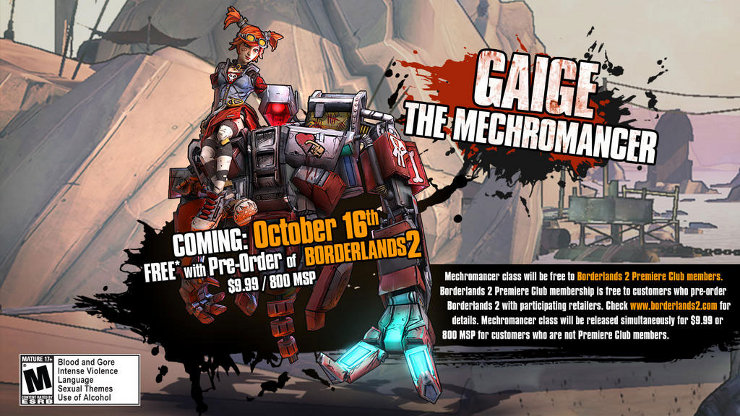 We enjoyed the heck out of Borderlands 2 and adventured as the Siren in the main, but three other classes each have a distinct style of gameplay. A fifth character class, Gaige the Mechromancer, was unveiled in April to no little glee and some considerable controversy; those who pre-purchased the game would get the class for free at some point after the games release whilst for others it would be a paid DLC package. In the hubbub of launch the additional character class got lost in the shuffle a little, but Gearbox announced today that the Mechromancer would be coming out one week earlier than anticipated - today!

The Mechromancer is at its core a pet class whose skills serve to bolster the abilities of Deathtrap, her loyal companion and killing machine, or herself. Controversy was piqued due to the inclusion of the Best Friends Forever tree, the design of which is intended to make the game appreciably easier for those new to the franchise or first person shooters in general. Rather than add more complex mechanics on a risk/reward basis as with many other skill trees, it provides a flat bonus to general aspects of gameplay such as health/shield regen and reducing the penalty for missing a target. In somewhat lazy shorthand this was described as an ideal 'Girlfriend Mode', but really is a mode designed for newcomers (AKA newbs) and in our opinion is a great idea. 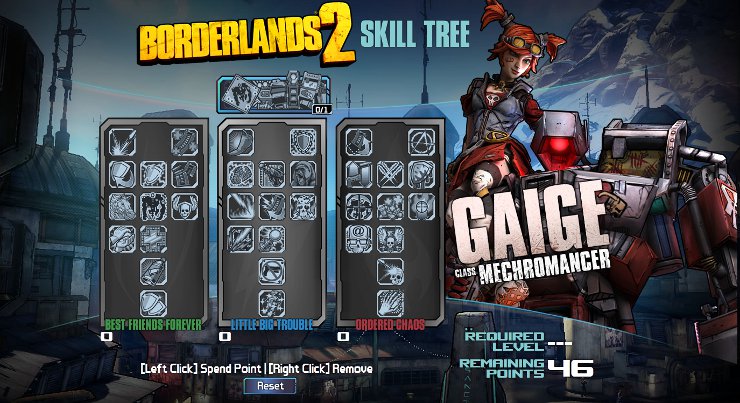 Two other skill trees diverge quite a bit from Best Friend Forever. Little Big Trouble grants Deathtrap a lazer and additional elemental damage, including the ability to shoot him with an elemental weapon and have him attack with that element type himself. Ordered Chaos on the other hand is a much more self-centred tree which grants an 'Anarchy' bonus when you kill an enemy or reloaded an empty magazine. Anarchy can be stacked for increased damage or unleashed in a single Melee attack for massive damage and health, depending on your own preference.

Knowing Gearbox there will be plenty of new easter-eggs in this DLC too, but you'll have to find those for yourself. Gaige the Mechromancer will be available before the end of the 9th October on all platforms for $9.99 or 800 Microsoft Points (XBox 360).