👤by Tony Le Bourne  Comments 📅10-08-17
Conclusion
In recent years, I have sometimes felt that the expanding line of ROG motherboards had started to dilute the essence of what the Republic of Gamers franchise was founded to be, with some slightly older platforms seeing such variants as (Ranger-Formula-Hero-Extreme). Now with the STRIX branding falling under the ROG umbrella, things seem a little clearer, STRIX = Gamer heaven. We see a motherboard packed with high-end features, but significantly cut down on enthusiast overclocking features that may not necessarily be needed by gamers, ever. The cost saving is then fed back to the consumer and the result is an incredibly competitive, high-quality motherboard. It's understated aesthetics are attractive, and taken at face value somewhat... bland... but the point is, the neutral greyscale design compliments RGB lighting. The RGB lighting is very bright and very visible through a chassis window. It consists of around 9 or 10 LEDs which each can display various advanced lighting effects that can then be paired up with an RGB LED lighting strip, or even memory modules such as the Team Group Delta RGB. 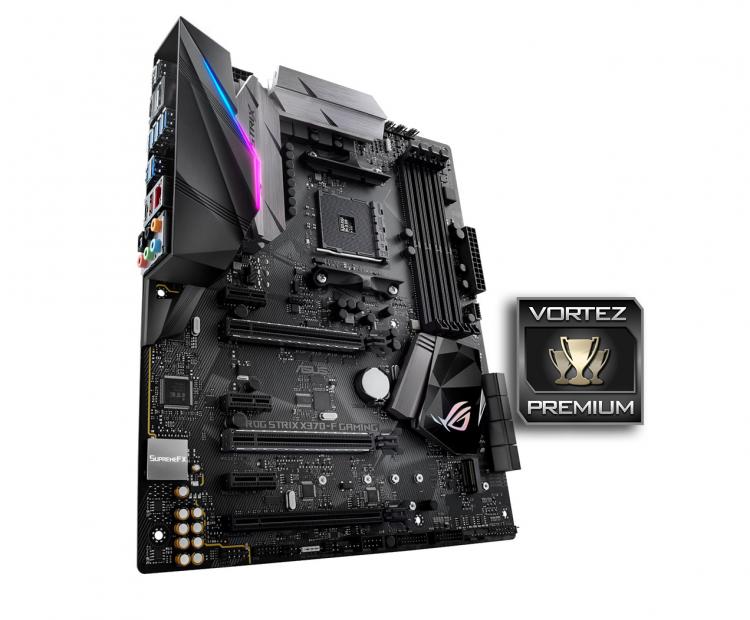 Two of the PCIe x16 slots both feature steel reinforcement (SafeSlot) for multi-GPU setups, and there are various circuitry protections in place too (LAN Guard, DRAM Over-current Protection), so you can be confident that ASUS have created a motherboard capable of handing whatever you throw at is without being destroyed (metaphorically speaking). Something we are seeing a lot of lately, are BIOS improvements, allowing the CPU to comfortably pair with 3200MHz DDR4 memory, which will give a nice bump in performance.

ASUS have entered the ROG STRIX X370-F at a very competitive price point, and there are only a few points we feel the need to mention. One of which is that we would liked to have seen a second RGB lighting zone to really help it stand out, also the BIOS was a little laggy (but this didn't really cause any issues and may be an easy fix with an update). Aside from these, we have little doubt that this will be a favourite amongst gamers moving to the AM4 platform.

Packed full of quality features, the ROG STRIX X370-F gaming can give you an incredible foundation for a gaming system.