It's been a year since we last sampled anything new from the X79 stable and so it was left to who else but ASUS to quench our thirst for a new X79 motherboard. With the quietly introduced Ivybridge-E ushered in we expected a flurry of activity in the motherboard market but sadly this simply has not been the case with most manufacturers content to simply update the BIOS on their now 2 year old mainboards.

The ASUS X79 Deluxe doesn't add anything startlingly fresh to the platform but what it does give us is a complete platform that leaves you wanting for nothing unless you are looking for ultra high end overclocking ability. The feature set of the motherboard is fantastic, the included accessories are numerous and the aesthetics are sublime. We found it very hard to fault this motherboard, so much so that our only valid complaint is that it cannot do 16x 16x 16x in a triple card configuration, slowing down to 16x 8x 8x. Such extravagances are left to the flagship Rampage Extreme motherboard which coincidently, ASUS have unleashed a new Rampage black edition, a motherboard that we hope to sample in the very near future. 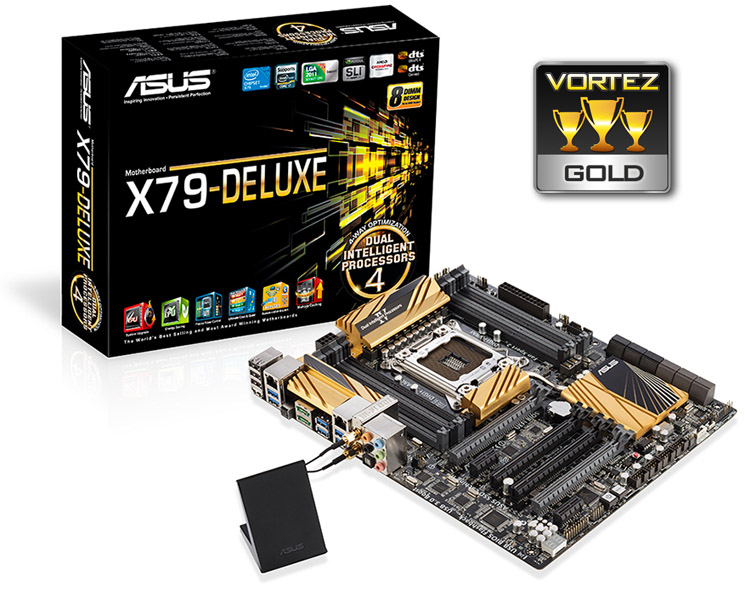 The X79 Deluxe performed well throughout our range of tests, occasionally excelling which made up for some of the not so good results but for the most part it was above mid table. Overclocking the mainboard was very good despite not being touted as an overclocking motherboard; again, there are higher specified motherboards for this purpose costing significantly more. What the ASUS X79 deluxe offers is a very solid, all round motherboard suitable for 99% of PC users and while it may not be the outright master of any particular task, it can do more tasks and has more features than most motherboards available on the market. For this reason we are giving it our Gold award because there are few motherboards which can offer so much, look so good and perform quite as well as the motherboard we have sampled today.

NOTE: If you buy this motherboard or already own a gold-themed ASUS motherboard you can enter their latest competition - ASUS Gold Rush and have the chance to win some cool swag!