👤by Matthew Hodgson  Comments 📅29-08-18
Conclusion
To conclude the review, our observed figures show that the drive is capable of more than the claimed 1600MB/s, with ATTO giving us 1771MB/s, though, on the other hand, we also saw some fairly average (at best) results from tests like PC Mark 8, AS SSD and AIDA64.

While the Corsair Force Series MP300 drive offers great speeds when compared to a SATA 3 drive, its unfortunately left in the wake of drives from the likes of Samsung and ADATA.

Samsung, while offering vastly faster drives, are also much more expensive which detracts from their appeal somewhat, while the ADATA XPG SX8200, which we tested in April, arrives at an almost-identical price point to the Corsair MP300, but beats the performance in all of our tests, and rather convincingly so.

We like the unobtrusive design on the Corsair MP300, with the black and white heatsink sticker; the drive should suit almost any build you can throw it in.

Unfortunately, compared to the MP500, which is around 18 months old at this point, the MP300 is out-performed in every metric. Wed expect technology to advance at a rate faster than this, which is our biggest concern regarding the drive. 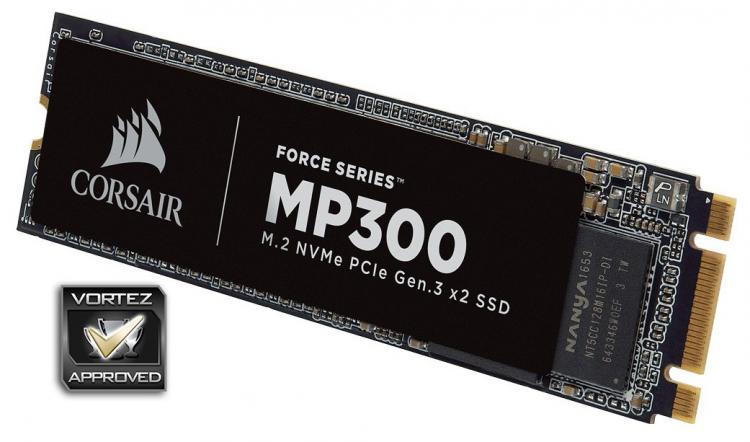 The Corsair MP300 delivers exciting performance at a good price, much better than any SATA SSD.

Cons
- Not as fast as the rest of the NVMe pack
- MP500 is faster, despite being substantially older