👤by Weston Dakin  Comments 📅10-07-18
Conclusion
For just shy of £100 the Corsair HS70 appears to offer it all, the styling is attractive, and they come in three different variants to suit different tastes, this is then backed up by how the headset is constructed and these are genuinely better built than some headsets that cost considerably more. The HS70 also offers impressive wireless connectivity that has a range of up to 40ft and is highly stable when moving away from the transmitter, as long as you stay within the range and don't place too many thick walls or doors between you and the transmitter. The battery life provided by the headset is strong and should last a few days of light gaming or one really long streaming session on one of the main platforms. The built-in controls and comfort further enhance the overall package and make the HS70 really strong when it comes to price to performance. The icing on the cake though has to be the audio performance, and we were highly impressed by the quality on offer. The overall sound is punchy, vigorous and detailed which makes them not only enjoyable for multimedia but also for gaming.

The HS70 isnt flawless though, and there are one or two things small things that are wrong and prevent them from being the perfect headset. The first thing is the connectivity, with the supplied transmitter the headset is limited in compatibility and only works with PC or PS4. For some people that wont be an issue, but for those that would like to use them on XBOX, they are unfortunately out of luck. The second minor issue is the volume control dial, it works great, but it is too over sensitive, and we found that when making adjustments to the headset it was too easily knocked resulting in big volume changes in the audio. A simple hand placement change does help solve this, but if you didnt know that, then it could be a little bothersome. The lack of RGB illumination could also be a negative for some, but in reality, RGB on a wireless headset isnt the best idea as it can heavily drain the battery, thus resulting in shorter use times. The microphone on the HS70 is solid enough for in-game chat, but not strong enough to be used for streaming. But when thinking about it, very few headsets offer a microphone solution that would be perfect for streaming, especially at the price point.

Even with the faults, the HS70 is an extremely impressive headset that offers pretty much everything you could want from a gaming headset. The lack of XBOX support could likely a deal breaker for some, but if you just plan on using them for PC or PS4 or even both, then the HS70 is a superb gaming headset and is one that we can easily put our stamp of approval on. 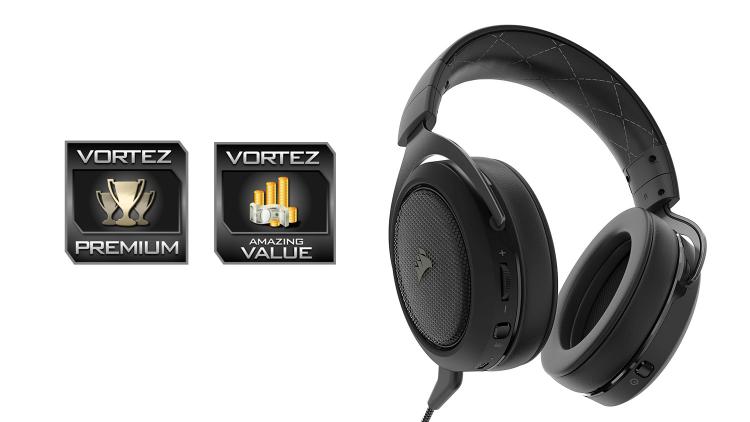 The Corsair HS70 punch well above their weight and offer a full-featured performance that is rarely seen in a wireless headset at this price point.