In truth, we had a hard time discerning why Crucial had asked us to test this kit when we first received it and honestly believed their had been an admin error somewhere because we believed we had tested this kit before with the original Ballistix Sport. It wasn't until we looked a little closer that we realised this kit did have a few subtle differences. It is our opinion though that the differences do little to justify a 'new' product sadly. That isn't to say this is a bad memory kit, far from it. It retains its silver status but we had hoped for more.

The specifications are near identical to the older Ballistix Sport which would have led us to believe that the kit would also perform the same. Performance however is enhanced ever so slightly but with that performance increase came a slight drop in the additional bandwidth we could attain (2750MHz as opposed to the reference 2400MHz). This could easily be quantified though by different batch numbers as not all memory kits from the same family are guaranteed to overclock the same. So then, we would say that the differences are purely aesthetic. 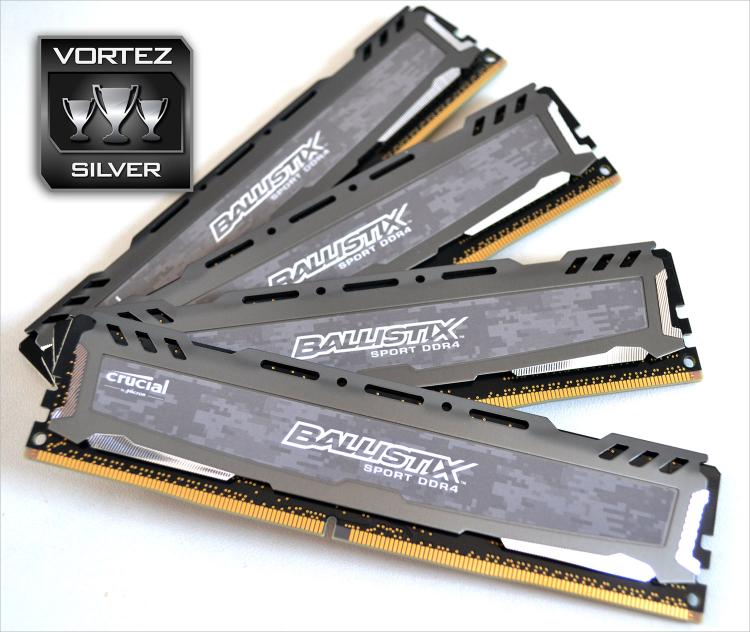 If you are looking for a modern , smart looking memory kit then this kit is certainly worthy of consideration. We are however puzzled as to why Crucial would release a near identical specified kit with the same bandwidth and timings as the original Ballstix Sport without so much as a colour difference. If digital camouflage is your bag then you may want to pump the extra £10 into this kit, otherwise we would say save your money and get the 'normal' kit.

Short in stature with unobtrusive aesthetics, the Ballistix Sport LT DDR4 kit offers a good balance between performance and cost.

Cons
- Not enough to justify a 'new' release