👤by Tim Harmer  Comments 📅02-06-21
Conclusion
The quality of audio hardware released by EPOS since the split from Sennheiser has deeply impressed us over the past 18 months, and were pleased to note that the B20 Streaming Microphone hasnt broken that trend. By offering high quality voice pickup and uncommon versatility in this price bracket EPOS are planting a flag in the ground in the streaming and amateur broadcasting market segment.

In terms of the fundamentals, EPOS are off to a good start. Out of the box vocal clarity is of good quality for broadcast streaming, and excellent for voice comms through common applications such as Discord and in-game functionality. Feedback from teammates during gaming sessions was extremely positive, much more so than any headset solution and at least on par with other stand-alone microphones.

Two aspects really highlight its usability for amateur and hobbyist streamers as well as some gamers who want more control over their voice comms. Zero-latency side-tones, the process by which microphone input is fed-back into sound-isolating headphones to help you modulate your own speaking volume, is a feature that some may overlook or take for granted that really shouldnt be. The fact that the B20 can also act as a separate audio output device for game sounds or team comms is also underrated if you have discrete speakers alongside an open-back headset.

Another feature that we appreciate is the dedicated mute button. Its often missing on less expensive alternatives, but without a mixing desk or OS-level hotkey functionality its the simplest and best way to cut all microphone input in the event you need to. And such events can happen more often than you think. The subtle indicator LED is the correct final touch to this solution.

The Gaming Suite software on the other hand is... lets just say a work in progress. At a base level the functionality it offers is strong, particularly side tone customisation and noise gating. The Profile system is basic, letting you save settings to a profile and offering a set of four defaults to work from. Preset Voice Enhancer EQ settings are a nice touch, but nothing really blew us away. Youll be wanting to augment your mic skill with 3rd party mixing software to really make the most of the B20. 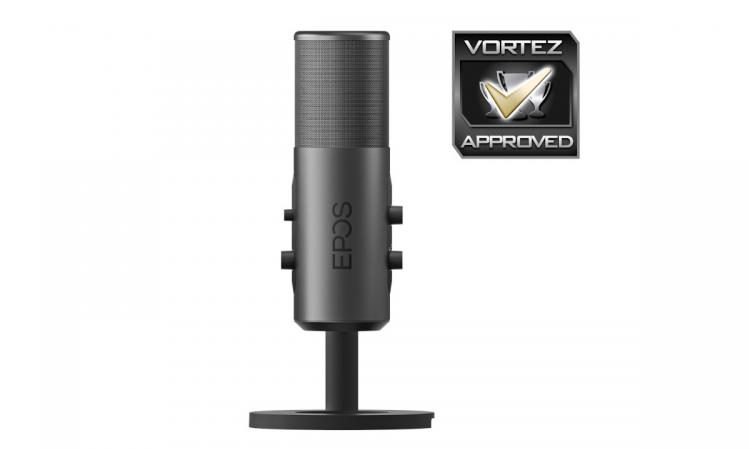 By including four different pick-up patterns EPOS are clearly attempting to tap into the collaborative streaming segment. Real-world events have put paid to that concept for now, but in the not too distant future we can see it picking up. In such scenarios both the bidirectional (for podcasting) and omnidirectional (console streaming in a larger space) could be key tools in the B20s arsenal.

On a more functional note, its good to see EPOS embrace current mounting standards rather than sell adapters separately; where the B20 may lose out however is finding compatible accessories. Pop filters, if theyre needed beyond the built-in design, should be trivial to acquire and adapt; suitable shock mounts by contrast may be much more difficult to source due to the mics non-standard shape, dials and connector locations.

At £179.99, the B20 is facing some stiff competition from Elgato and RODE, who both offer extremely competitive alternatives in lower price brackets. The B20 really wins in its out-the-box adaptability and potential to take a budding venture to the next level. Competitors may however have the advantage in the selection of 1st party accessories and wider adoption of their products offering a deeper community knowledge pool to draw from.

The EPOS B20 Gaming Microphone is a solid new entrant at the higher end of the consumer USB microphone market, but offers some features difficult to find elsewhere. Although lacking in native accessories, and with software that is foundational rather than fully mature, the B20 will be a device that allows streamers and content creators to take their productions to the next level, without compromising gaming.

- Software teething issues
- Lacking additional accessory options at launch
- Towards the expensive end of mics in the gaming segment.