👤by Tim Harmer  Comments 📅09-12-12
Conclusion
Gone are the days of the PC as function over form design - fan controllers need to excel in two key facets to be a truly great product: functionality and the aesthetic. Fractal Design attempt to achieve in these areas by adhering to the old adage of keeping it simple and avoiding over complication.

First impressions of the Adjust 108 were very good, as is often the case with Fractal Design's products. The brushed aluminium finish of the bezel is exceptional, and the sliding voltage adjusters feel sturdy with reasonable responsiveness; by contrast the LED lighting is a little uneven at mid/high levels and the white brightness is clearly higher than blue. Two minor flaws turned out to be the LEDs shining up the slide channel (having not been blanked off behind the bezel) - which is ameliorated by the black PCB - and a slight amount of light bleed behind the left-most slider, but they're still minor.

Functionally, the Adjust 108 works well. By varying between 5V and 12V it allows control down to levels where many fans are almost stalling or fail to spin up, though the latter tends not to happen thanks to the system booting at 100% fan speed for a couple of seconds. This allows you to throttle down even loud 80mm fans to near whisper quiet levels of noise, either individually or as a daisy-chained group. We're also pleased that the Adjust can cope with 2-wire and 4-pin PWM fans too, though it should be noted that 4-pin fans will be controlled through the cruder voltage adjustment rather than PWM.

Advanced users should note that the Adjust 108 doesn't incorporate any additional cooling for its electronic components. Long-term operation near the channels 35W limits with high amount of throttling could conceivably cause the controller to overheat, and would certainly be something we'd want to keep a close eye on. 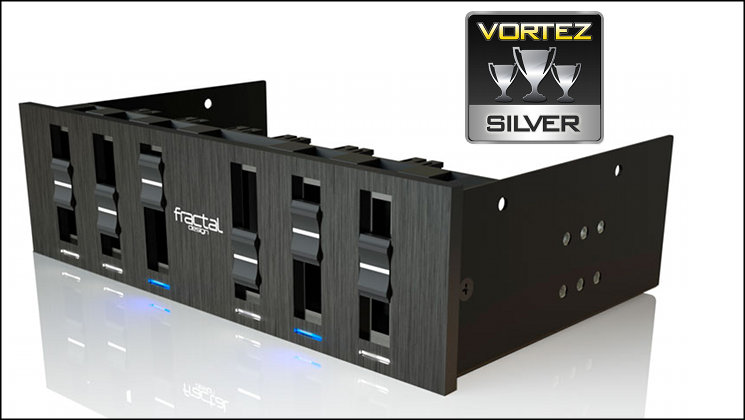 In a couple of instances, the minimalist design of the Adjust 108 has served to reduce its potential feature-set. Key examples are: locating the LED brightness controls - a jumper setting - on the PCB behind the bezel, effectively requiring removal of the device to change; and having no facility to turn off a fan channel entirely on-the-fly. The former is more of a frustration, especially if wanting to place the PC in the front room or a bedroom; the latter something of a functional limitation. Neither would rule out the Adjust, but may be stumbling blocks for advanced users who want absolute control.

The Fractal Design Adjust 108 is a great fan controller with very good aesthetic qualities and solid, if unremarkable, functionality. Capable of 35W per channel, it will immediately be of interest for those running more exotic cooling setups who nonetheless desire a smart, unassuming 5.25" mounted controller. At near £30 it's more expensive than controllers with similar functionality, yet also far more suitable for systems with chassis doors than many competing solutions. Overall it's well worthy of a Vortez Silver Award.