👤by Weston Dakin  Comments 📅11-12-18
Conclusion
The GIGABYTE AORUS K9 has a lot of features that most other similarly priced keyboards dont, and that does make it a somewhat compelling offering, though like with most products there are some notable caveats. One of those issues is the lack of a wrist rest, this would have definitely made the typing, and gaming experience better because as is, the K9 is not the most comfortable to type or game on. We understand that adding a wrist rest would obviously make the K9 more expensive, but it would have made the K9 that much more appealing. Also missing is a USB pass-through, though if one feature was missing, this is one thing that we think could be omitted given the rest of the feature set. Of course, some of you may need this feature and thus it's omission could be a deal breaker, but for most, it's an addition that is nice to have, rather than a necessity.

One final thing that doesnt make an appearance are the macro keys, these are arguably more important to some than a USB pass-through, but sadly the K9 doesnt offer them. Of course, macros can still be utilised, but they would have to take the place of an existing key. Another unfortunate negative is the software. The base of it is there, it just needs some tweaking to make the core experience better for the end user.

On the plus side, the AORUS K9 has quite a few favourable attributes, and one of them is the splash-proof design. Out of the box the K9 uses a Hydrophobic Conformal Coating which means that you can - accidentally, of course, get some liquid on the K9 without it causing permanent damage. Another strong and appealing features include the underside cable management which is great as you can route your cable to the left, right or straightforward depending on where your PC is located.

Then of course to the gaming experience and again if you can cope with the comfort issues, or are willing to invest in a wrist rest then the K9 offers a great experience (for a select few genres). The K9 as we know by now uses Flaretech switches which are fast, though they are not as well polished as Cherry MX switches. However, they do have a few more advantages which are the removable nature of them, this means that if you fancy a change or if one of the switches fails, you can easily swap it out and replace it. GIGABYTE has also gone one step further and included nine switches, so if one does break, you can use the supplied tool to swap it out. 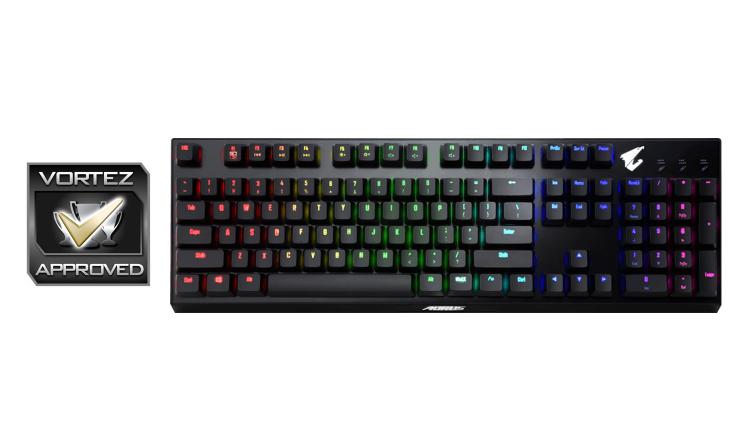 GIGABYTE have forged a different path with the AORUS K9, and it works thanks to the uncommon feature set and strong gaming performance.