👤by Tony Le Bourne  Comments 📅12-11-12
Conclusion
There are a few questions raised by this motherboard, mostly minor, but has made me realise a few things. Firstly, the A85X chipset adds few features over the A75 chipset, I can't help but feel that, as a platform, it is trying to be more than it actually is. The A85X chipset is not for enthusiasts, nor would any sane person want to spend a lot of money specifically to watercool a setup like this. Talking value, it is no secret that motherboard prices have shot up and it is now certainly starting to show for I feel like I should be talking about a motherboard that should have a retail tag of around £60-70 and not something that would be competing with the top end 790-890FX motherboard range of yesteryear. I believe that the A85X chipset should try pushing more towards an 'Ultra Media' type system using fully featured mATX motherboards with better focus on audio/video to give, not the better, but the BEST multi-media experience one can buy on the current market.

Despite the high quality 'Ultra Durable 5' seal of approval, this motherboard seems to be let down a little by stability (which is vital for the overclockers and enthusiasts looking to get the most out of a platform). The unstable baseclock is likely to be a BIOS issue and it's affects could be reflected by the fact I was unable to get the A8-5600K stable at the already proven speed of 4.5GHz. 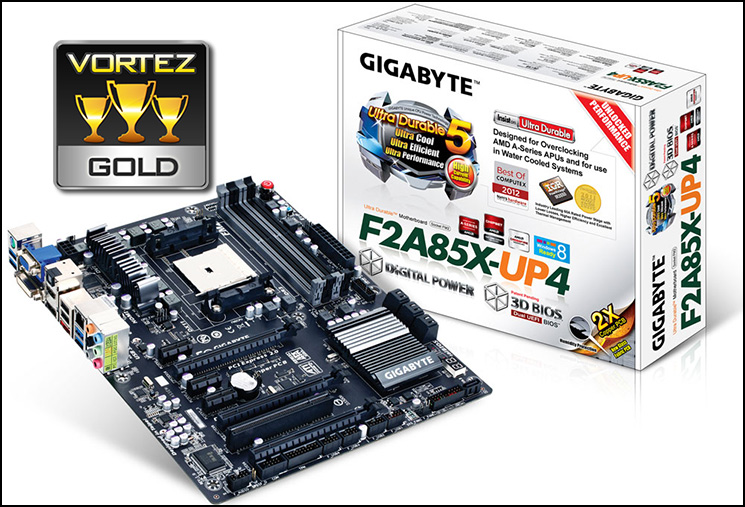 Rant over and considering todays market, The GA-F2A85X-UP4 comes in competitively against other high end A85X motherboards and has a lot to offer in features and versatility. GIGABYTE have managed to pretty much nail the perfect motherboard layout and aesthetic that is sure to please the vast majority of customers. Performance was competitive and trades blows with the higher clocked competitor. Overall, I can not say that this is the 'best' motherboard I have encountered, the VRM heatsink is wobbly, held in place by plastic push-pins, which leads me to say that this motherboard feels like a sheep in wolves fur, but, I like lamb... and for all the little misdemeanors, it doesn't overshadow the fact that this is a GOOD motherboard. Never before have I felt so torn between awards which led me to do more research to help me decide. I came to the conclusion that most of the issues are likely to be solved via BIOS and driver updates. Also a sheep in wolves fur would be wearing the fur because either it was bored of being the same as the other sheep or simply because it is a nutcase.

That said, the GA-F2A85X-UP4 offers great performance and allows for full utilisation of the latest APU features, wrapped up in an attractive, high quality, well thought out package that gives great value in the competitive market. For those reasons, and my strange craving for lamb, I have awarded this a Vortez Gold.

Click here for an explanation of our awards at Vortez.net. Thanks to GIGABYTE for providing todays review sample.