Today we will be taking a quick look at the latest graphics card to come out of NVidia's gates, the GTX560. We received the card courtesy of Gigabyte, fresh from Taiwan in OEM state and as such we will commit ourselves to a full in-depth review at a later date but today we will give you a quick overview of the card.

The GTX460 was a firm favourite for those looking for an equal balance of performance versus cost. Sure, it was never going to be up there with the performance of the (at that time) flagship GTX480 model but it was cheaper to run, cheaper to buy and also had decent performance for such a small card. Indeed it was what most believed to be a very good balance of the two main factors when buying a GPU, price vs. performance.

The GTX560, specifically the version we have on test today, the Gigabyte GV-N56GOC-1GI has features which you would expect for a NON-Ti card. As you will see on the specifications page of the review, the GTX560 has less shaders than its ti sibling but matching those of the GTX460 (336) yet thanks to the engineers at Gigabyte, this OC (Overclocked) edition has a core clock speed that's slightly higher than the stock GTX560, weighing in at 830MHz on the core coupled with memory clockspeed of 4008MHz on the 1GB of GDDR5 paired with a 256-bit memory interface. Moreover, this is a big increase over the GTX460's 675/3600 GPU/memory speed offering. How this translates to real world performance thought we will have to wait and see but at a glance it appears NVidia have indeed specified this card to perform between its stable mates.

About Gigabyte:
GIGABYTE was founded in 1986 in a small lab by four young engineers passionate to make their mark on the industry. GIGABYTE remains dedicated to the core belief of improving the lives of our users by manufacturing products that are high-performing, reliable, and of excellent quality.

Let's take a look at the specifications of the graphics card on test today... 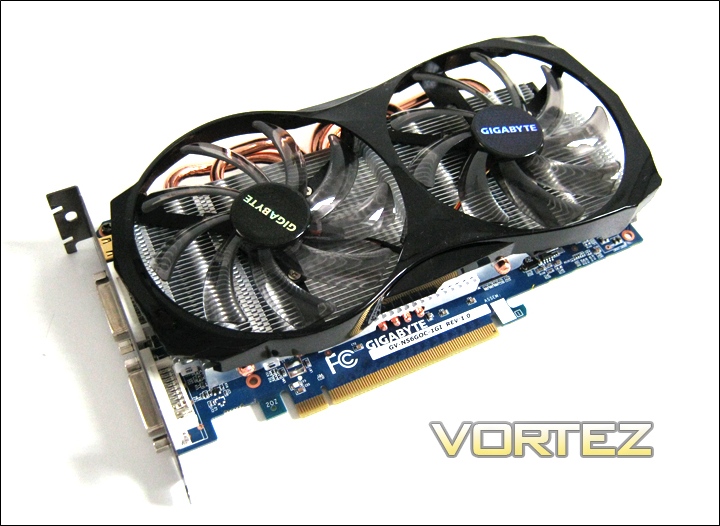