Following in the footstep of Nvidias recent successes, the GTX560 looks to continue the trend in the mid-range segment to battle AMD in a market that has traditionally been dominated by them. Certainly in the past few months, AMD have been very competitive with the Barts based HD6850 and HD6870, and more recently their HD6950 proved to a wolf in sheeps clothing considering its unlocking abilities. Nvidia have fought hard since their Fermi architecture was first released around a year ago. They were plagued by countless problems concerning power consumption, thermals and noise, and despite earning the single GPU performance crown with their GF100 based GTX480, AMD delivered a more compelling alternative in many ways. It wasnt until Nvidia released their mid-range Fermi derivative that consumers started taking them more seriously. The GF104 core became an immediate success offering significantly reduced thermals and power consumption whilst maintaining good performance levels thanks to the altered configuration of CUDA cores in each stream multiprocessor. It gave the stream multiprocessors on the GF104 more compute and shader power than even the GF100 GPU.

Fast forward to the end of last year, Nvidia made some significant gains in improving their GPUs to tackle the issues that had dragged them into a negative light. Reduced leakage allowed the GF100 core to be unlocked to its full potential and additional tweaks earned it its GF110 name. Now Nvidia have decided that the same treatment should be given to their GF104 core. Originally, the GPU was built to feature a total of 384 CUDA cores but 48 of those were disabled to meet power and thermal requirements. Their revised core comes in the form of the GF114 GPU, which similarly to its high end sibling, is fully unlocked with tweaks and less leakage. In turn, it has deservedly found its way as the heart of the GTX560 Ti.

Some may remember Nvidia first using the Ti moniker on the GeForce 2 cards until its demise on their 4th generations of graphics cards. Representing Titanium, the cards boasting the moniker were renowned to be popular, hence Nvidia bringing the name back. The GTX560 is set to succeed the GTX460 but not replace it based on their differing price points. At $249/£200, it is meant to fit in between AMDs HD6870 and HD6950. Another benefit of the GTX560 over the GTX460 is the lack of confusion regarding its memory framebuffer at a set 1GB and more importantly, its clock speeds are 822MHz on the core and 4000MHz on the memory, a welcomed boost to consumers. Another impressive feat has been Nvidias ability to fit the cards improved performance in a similar power envelope as the GTX460. Its TDP is a mere 10W higher than the latter, highlighting the GTX560s efficiency. This particular card by Inno3D has been overclocked to its limit out of the box, testament to the brands confidence in the card. Set at 950/4300MHz, it is one of the highest clocked GTX560s on the market and Inno3D have stuck to the reference cooler for its purposes.

A bit about Inno3D:

InnoVISION Multimedia Limited is a pioneering developer and manufacturer of a diverse range of cutting-edge multimedia PC hardware products established in 1998 Hong Kong. Our manufacturing operations have been set up since 1990 in Shenzhen, China. In this short period of time we focus on manufacturing OEM/ODM products as well as contracting out extensive production and research facilities to specialist companies. We have accomplished international recognition by PCs top reviewers as becoming an outstanding success and one of the most fast growing companies in Asia.

InnoVISION boasted a significant rate and increase in the market share of graphics card sales over the past years. To maintain InnoVISION highly respected image we will continuously focus to achieve a competitive advantage by maintaining constant product quality by continuous research and advance technical support to target customer needs. 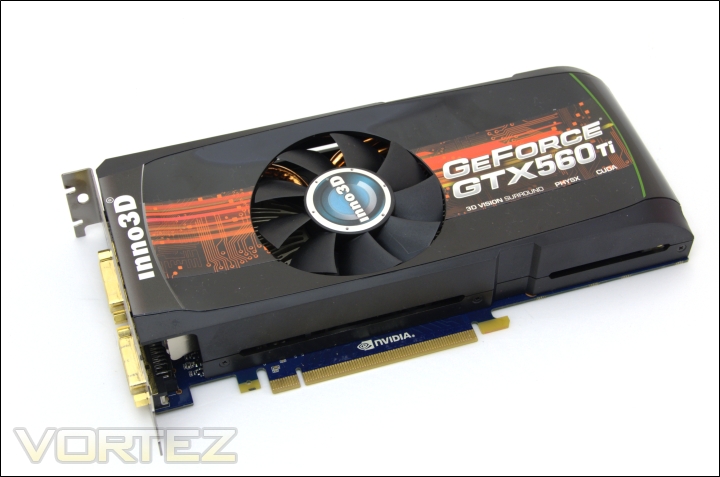 The previous Inno3D card we saw was a truly impressive card so lets see if their GTX560 can keep to the same promises.

There are currently 567 user(s) online:
Google