Back in December, AMD released their much awaited Cayman based HD69XX series of cards. It represented a transition to a revised architecture that was more catered towards compute performance with new features such as Morphological Anti-Aliasing and enhanced tessellation performance to meet the requirements of newer DX10/11 titles. For the most part, the HD6970 was a success despite its specifications appearing subtly different to the highly popular but ageing HD5870. Employing the VLIW4 architecture, AMD had managed to maintain improved performance over their previous generation of card without compromising on die size. We found the HD6970 to be an 18% improvement over the HD5870 on average despite sporting 1536 stream processors rather than the 1600 available on the Cypress HD5870 GPU. On the other hand, we were disappointed to see that for a next generation flagship graphics card (until we see the HD6990), the performance increase was still not enough to outcompete Nvidias simultaneously released refreshed line-up.

The HD6970 has been positioned to compete against Nvidias GTX480 and GTX570 at an RRP just below £300. The card boasts the new refined VLIW4 architecture with 1536 stream processors and 96 texture units forming the basis of the GPU. An improved render back end also helps improved Anti-Aliasing performance, which coupled with the 2GB on board framebuffer has proven to be of great benefit at high in game settings. Built on the 40nm manufacturing process, the HD6970 is one of the biggest GPU cores to come from AMD (ATI) but it represents a stop gap solution before the onslaught on new GPUs to be manufactured on the 28nm process later this year.

Our HD6970 variant on test today is courtesy of GIGABYTE, poised to go against the ASUS HD6970 we reviewed previously. GIGABYTE are no strangers to the world of graphics cards, being well established as one of the most innovative manufacturers around. Known for their use of high grade Ultra Durable components and cooling solutions such as the SOC Windforce X3 cooling design, GIGABYTE have always tried to stay ahead of the competition in various markets. Our sample however, follows the standard reference design, same as the ASUS card we reviewed so we can expect more of the same. The card features the same 1536 stream processors and 96 texture units found on the ASUS. It also sticks to the reference clock speeds of 880/5500MHz, 10MHz less on the core than the ASUS but this is no disadvantage to those users ready to overclock themselves or for those unwilling to pay the premium of the pre-overclocked ASUS card. It will be interesting to see how the two manufacturers fare against each other when armed with the same weapons.

A bit about GIGABYTE:

GIGABYTE was founded in 1986 in a small lab by four young engineers passionate to make their mark on the industry. GIGABYTE remains dedicated to the core belief of improving the lives of our users by manufacturing products that are high-performing, reliable, and of excellent quality. Here are some of GIGABYTEs innovation highlights:
-USB 3.0
-Ultra Durable Technology
-GPU Gauntlet sorting
-Docking Netbook 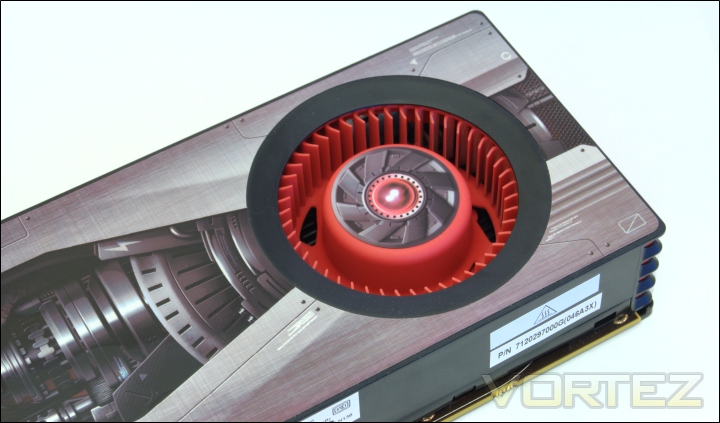 With that covered, lets have a more detailed look at the card.