All P67 Sandy Bridge motherboards will be benchmarked against each other using the Intel Core i5 2500K. The maximum overclock will also be included within the proceeding benchmark tests to identify performance gains as a result of tweaking CPU clock speed via the multiplier.

With overclocking simplified on Sandy Bridge, this means that achieving the best overclock couldn't be easier. CPU voltage and multiplier just need to be modified accordingly. The ultimate milestone is 5GHz on air cooling for the Intel Core i5 2500K, my immediate action was to set the multiplier at 50 and increase voltages to sustain this overclock. I soon began to have problems with this, altering PLL, VTT and increasing the CPU voltage to 1.5v still wasnt enough to allow for a stable overclock. It did boot but during stress testing using LinX I was soon given a BSOD. So the work then began with slowly moving backwards whilst having higher voltages to establish the best frequency overclock.

So, from here I began moving the multiplier back whilst keeping reasonably high voltages in place - 4.8GHz (40 x 100) was ultimately the overclock result that was stable. CPU voltage being 1.475v and PLL 1.9v. Note CPU-Z screenshot displayed the voltage incorrectly as you will appreciate overclocking 4.8GHz would not be possible on 1.044v! 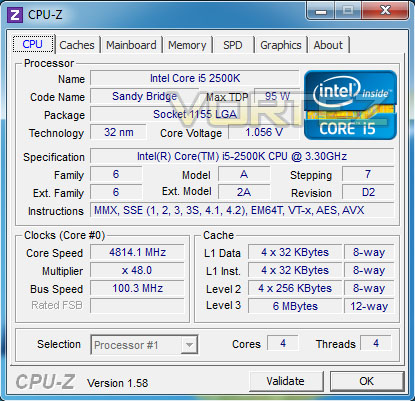