👤by David Mitchelson  Comments 📅18-04-12
Conclusion
Whilst there are obvious performance benefits to upgrading to a 6Gbps SSD many enthusiasts still struggle with the matter of pricing - but thanks to Kingston this no longer needs to be an issue.

Kingston have taken their popular HyperX performance SSD and integrated 3K toggle NAND as opposed to the 5K toggle NAND found on the original HyperX SSD. In simple terms this means that the end-user can benefit from lower cost whilst still reaping high-end performance.

Performance in our range of benchmarks revealed that the 3K version of Kingstons HyperX whilst being behind the 5K version still maintained excellent results. Write performance was behind in some of the benchmarks but users generally read a considerably more than write so the compromise for price to performance is a fair trade-off. 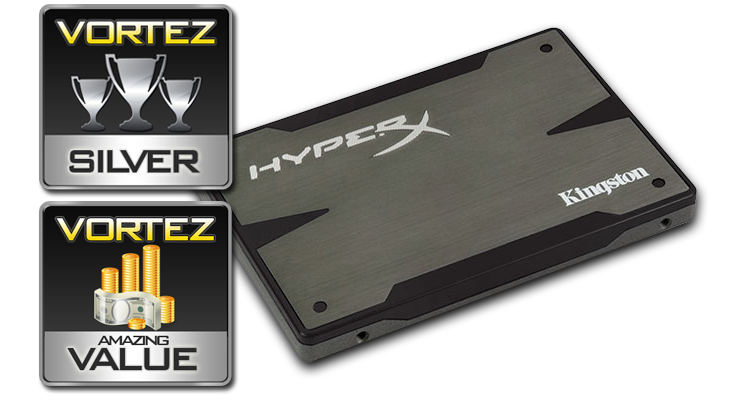 Priced at £119 inc VAT  this 120GB SSD is just under £1 per GB making it an attractive investment for many wanting to jump onto the SSD bandwagon. For those who have been reluctant due to soaring prices, they neednt worry  never has there been a better time to invest in a 6Gbps SSD.

Kingstons HyperX 3K SSD is a top performer and can be had for less than £1 per GB  we predict lots of sales for this new drive and it comes highly recommended by Vortez, winning both amazing value and silver awards!