👤by David Mitchelson  Comments 📅20-07-11
Closer Look
MSI have chosen to arm the Marshal with an extreme power design  24 Phase DrMOS PWM. DrMOS are 400% faster than traditional MOSFETs, 1 Phase DrMOS is actually more efficient than a 4 Phase traditional MOSFET and is more efficient. You will notice, as on many of MSIs motherboards there arent any Solid CAPs around the CPU socket  this is where Military Class II comes in, instead we have Hi-c CAPs. These Hi-c CAPs have a Tantalum Core and have up to 8 times longer lifespan when compared to a Solid CAP. We touched on these components on our trip to CeBIT earlier in the year. The design concept behind the heatsink design on Marshal is based around the military fighter jets. Being a Military Class II motherboard, Marshal carries with it this inspiration. The heatsink has the Super Pipe design which is 8mm thicker and offers 90% better cooling efficieny.

With a 24-Phase Power Design this motherboard is designed for extreme overclocking hence the reason we also have dual 8-pin power  providing more than 60A for more stability and lower impedance.

With Marshal being LGA1155 this board will accommodate Intels 2nd Generation Core i3/i5/i7 Processors. You would undoubtedly want to opt for an unlocked multiplier on this motherboard to take advantage of the overclocking features so the K series is definitely something to go for. Being LGA1155 we can install LGA1155/1156 CPU Coolers. 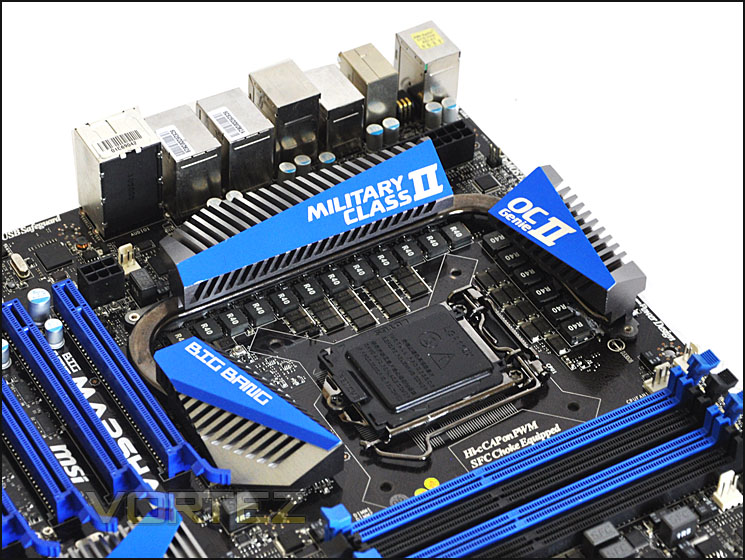 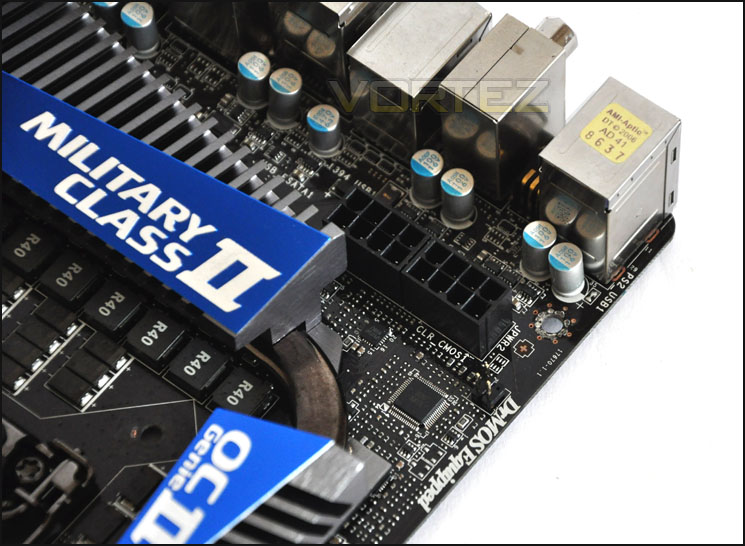 In terms of memory capacity the Marshal has 4 DIMMs supporting DDR3-1066MHz to 2133MHz (OC) and a maximum capacity of up to 32GB. Around the memory slots we have Super-Ferrite Chokes (SFC) again these are included within the Military Class II series and delivers 30% higher current capacity, 10% better power efficiency for better overclocking power stability. In general even if you arent going to overclock SFCs are a leap in power efficiency making the motherboard much more robust and a future-proof product to invest in. In the corner we have the PCI-Express Ceasefire switches (PEG1  PEG4). CeaseFire allows you to quickly and easily benchmark graphics cards by having a switch function to control whether or not a card is active. It even offers the ability to disable the card when you are not gaming for energy efficiency. Next to the CeaseFire controls we have a large blue connector named FV1 on the motherboard this is the Voltage-Check Point. Here we can monitor voltages of CPU, DDR3 and PCH. It gives those who are desiring it that extended functionality for ultimate performance usage. 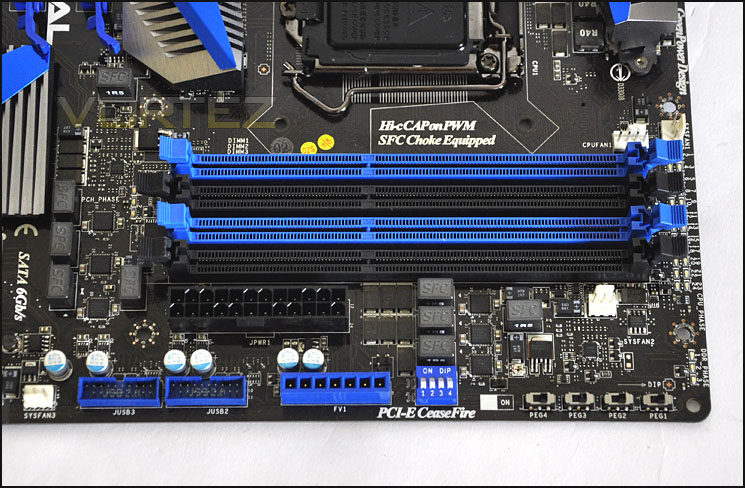 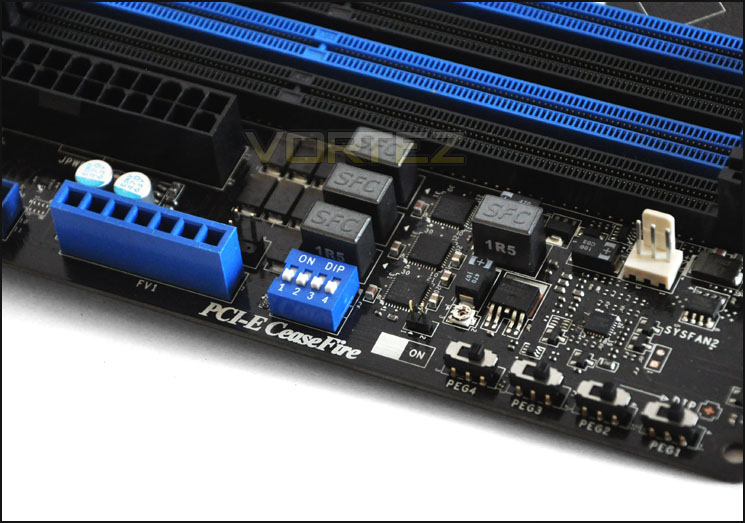 Directly next to the Voltage Check-Point we have dual USB3.0 headers. Usually you would only have one such header but MSI have provided owners with even more expandability  why not if you have the space? 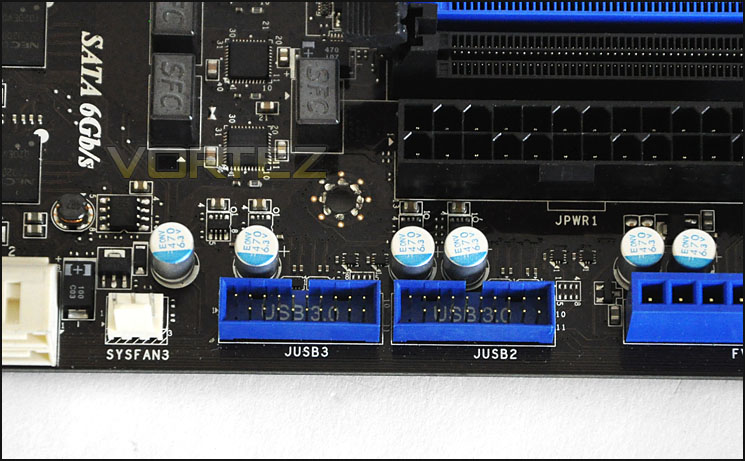 Lots of USB3.0 functionality  including 2 headers

In terms of storage options we have a selection of SATA 3Gbps and 6Gbps ports. The black ports in the middle are 3G whilst the off-white ports are 6G. The ports on the left of the picture below (off-white) are supported via Marvel SE9128 whilst all other ports via the P67 chipset. 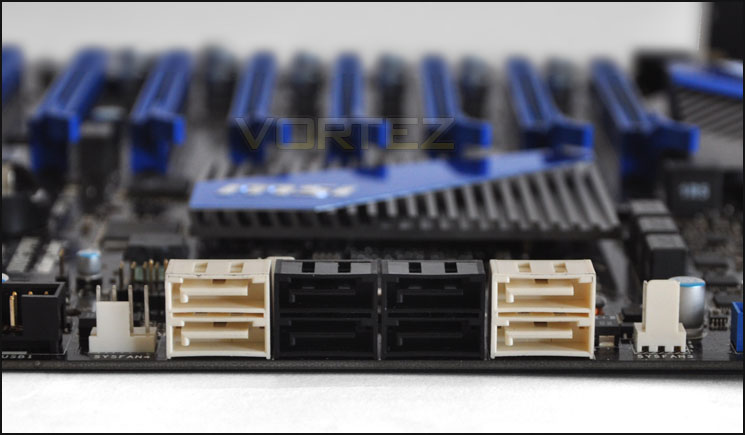