The NVIDIA GTX770 is a great card of that there can be no doubt. You may have noticed that thus far we have not commented on the price. We purposely left this until the end of the review for good reason because while it may well accused of being a re-badged GTX680, it is priced much closer to current GTX670 at a very reasonable £329. We have been vocal in accusing NVIDIA have adding a premium to their cards (sometimes justified, others not) however, with the GTX770, we find that NVIDIA have priced the GTX770 very aggressively, beating both the GTX680 and AMD HD7970 by a fair wedge.

Not only does it beat the competition on price but for the most part, it equals and often surpasses both the previous generation flagship NVIDIA card and current range topper from AMD. With this in mind it can be argued that the GTX770 actually offers very good value for money. Sure, £330 is still a lot of cash for a card which cannot be labelled as class leading. It does however give those who like to watch the pennies flagship performance at a drastically reduced cost.

Dressed in GTX TITAN clothing, the GTX770 is a stunner to look at and once installed you would be hard pushed to tell the difference between the two so we have no complaints there. If we did have one complaint, it would be the choice of core, the GK104. While there is nothing wrong with the performance of this core, this being a last generation flagship core, you would expect it to have current gen technology. The blistering memory speed goes some way to rectifying this problem however, we would have liked to have seen a revised GK110 core rather than last gen GK104. 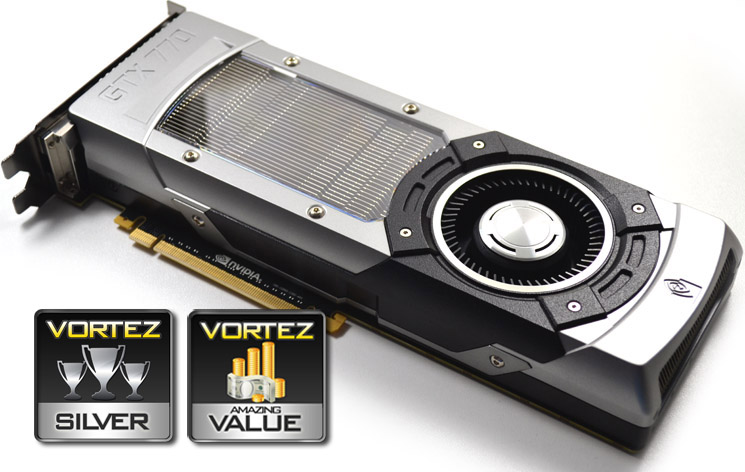 In fairness to NVIDIA however, it is a marketing strategy they have used to great effect in the past by shifting surplus last generation cores at a knock-down price in current gen. So with that in mind, if it helps keep costs down while not sacrificing performance, we are certainly not going to complain too much.

The GTX770 is like going out on the town to a cheap bar and scoring. Back at your place, what you thought was a young stunner turns out to be older than she originally looked - but boy can she move! This, like the GTX770, leaves you with a smug grin, regardless of your initial misgivings.

To summarise:
With the GTX770 you get a near perfect balance of performance and cost. NVIDIA have come up trumps yet again with this generation. AMD should be afraid because NVIDIA now have 3 cards that surpass the performance of their own flagship single core GPU.