👤by David Mitchelson  Comments 📅26-07-12
Conclusion
The market is littered with 1600MHz DDR3 kits for Z68/Z77 and thanks to significant price-drops this has made way for faster kits being even more affordable. Enthusiasts using Sandy Bridge/Ivy Bridge are fortunate enough to only have dual channel kits to invest in, which are much cheaper than triple/quad channel but also have such options as 2133MHz within grasp.

The new Viper 3 series we have been taking a look at today is a work of art to behold. Aesthetically, Patriot have hit the nail on the head. Dubbed Black Mamba this kit just as its venomous moniker suggests; looks deadly and as performance has shown, is fast. Although performance in some areas demonstrated nominal difference between rivals the Viper 3 kit displayed solid performance and did not shy away. 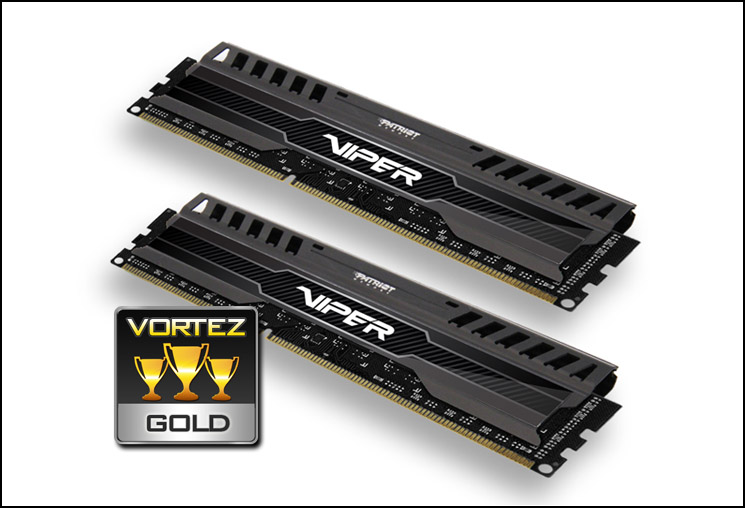 Priced at approximately £47.99 / $55 the Viper 3 8GB 2133MHz kit is reasonably priced. Its obviously more than most 1600MHz kits but then can such a product exceed 2000MHz? If bandwidth and better overall performance is the order of the day then opting for a faster kit is certainly a sensible move.

Those who are wanting to overclock further should look at a different kit within the series as this 2133MHz kit with CL11 prevents such modifications. This particular kit would be most useful to those who arent interested in tweaking memory and want the best performance out of the box.

Patriots Viper 3 Series is sure to be the talk of the town. Visually this new DDR3 kit is enthusiast eye candy and the other boxes are ticked too. Performance is solid and pricing is fair. Those looking for plenty of memory bandwidth and who are building a stealthy, aggressive rig would do well to consider this product. Viper 3 Series comes highly recommended by Vortez and attains the prestigious Gold award.