👤by Matthew Hodgson  Comments 📅28-08-18
Conclusion
Muscle flexing and showing off seems to be the X5s game. Every test we threw at the drive was handled incredibly well, even prolonged usage such as the PCMark 8 test didnt faze the drive, eventually landing up with a stronger score than a 250GB Samsung 970 EVO. We witnessed almost 50,000 read IOPS and very nearly 120,000 write IOPS, truly impressive for an external device. To compare that to the Samsung T5 which we reviewed last year, despite using a similar connection, is almost laughable.

The device itself feels rock solid, thanks to the 150g heft and metallic paint finish on the magnesium shell. The non-slip base isnt exactly grippy, but its preferred over an all-metal design which would end up scratched and tarnished, even with a quality coating of paint. Something wed have liked to see is a choice of colours, even two or three options would be good, instead of being limited to grey/red.

During our testing, we noticed the drive got warm quite quickly but performance was reasonably consistent considering. The heatsink, paired with Samsungs thermal throttling software, ensured that performance never dropped hugely making it suitable for Content Creation and the likes.

Our main concern with the drive is the lack of backwards compatibility. The USB Type-C and Thunderbolt 3 standards work on the same cable, albeit with Thunderbolt 3 requiring a higher quality cable, so wed therefore expect some kind of usability on slightly older hardware with a Type-C port, which have become abundant in recent years, even if the speed was reduced drastically, this would open up many options for accessing your files elsewhere.

To sum up the drive, the price tag is steep, but the bleeding edge of performance is never cheap, but if you need to transport around massive files, with encryption enabled, backed by the knowledge that Samsung know a thing or two about flash storage, this is certainly the drive for you; however, on the other hand, if youre a bit less serious, wed have to recommend the Samsung T5 instead. 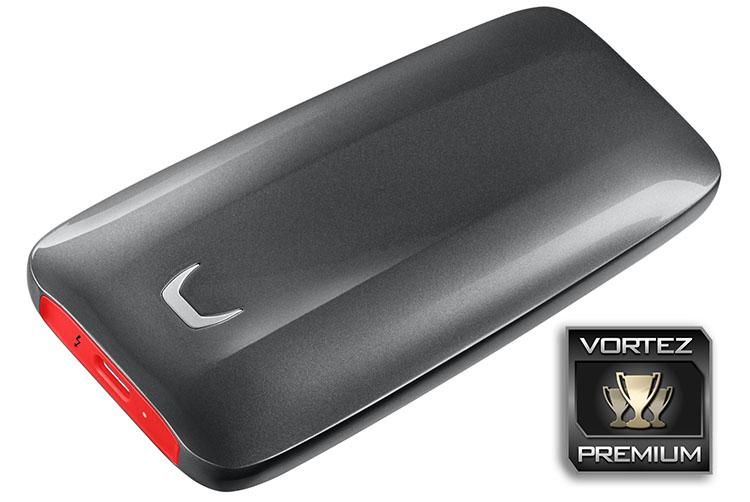 Fast storage in a beautiful shell with an ability not-too-short of a motherboard-mounted NVMe drive, however, you're going to pay through the nose for it.