👤by Matthew Hodgson  Comments 📅19-12-19
Conclusion
The Apex 7 and Apex Pro are both well thought out, properly engineered and worthy of the SteelSeries name, but the pricetag, particularly on the Apex 7, does make things a little trickier.

First off, the build quality is rock solid on the most part, the 5000-series aircraft-grade aluminium frame is incredibly stiff, preventing any kind of twisting or deforming. The keyboard also feels heavy, helping it remain in place if you tend to push your wrists into the front of the keyboard or type with heavy fingers.

The SteelSeries Engine 3 software is one of the best offerings out there, weve never had a problem with it during our years of testing; its intuitive, looks good, isnt hard on system resources and is 100% stable. Not much more you can ask for from a piece of software, particularly in this day and age of half-baked software releases.

We liked the OLED screen, it was fun to play around with and put our logo on, but like we said in the performance testing section, if you sit back in your chair at all, the screen becomes obscured by the keys in front of it, making it almost pointless 95% of the time. You need to be hunched over forwards with your chin above the keyboard to see the screen, which definitely isnt good for posture. Logitech did a similar thing with their G15 keyboard over a decade ago, and that was angled upwards for that very reason. SteelSeries, if youre sticking with the OLED screens on peripherals idea, making it a bit more accessible would be great.

RGB lighting on both keyboards, at least with the naked eye, appears to be identical, so the Omnipoint Mechanical keys dont appear to change that; it certainly wouldnt be wise to offer different LEDs anyway, with the Apex Pro using a mix of QX2 and Omnipoints. The built-in effects in the Engine 3 software paired with the bright, vibrant LEDs under the keys works well, and thanks to clever positioning, the letters on the keys appear to glow brighter than any of the competitors, which may be down to the larger font used, but either way, its great.

The Apex 7 we were supplied arrived with the QX2 Red switches, something wed tested before on the Apex M750 back in 2017. Theyre good if you play a lot of games but theyre a bit too mushy and definitely too loud, for that we have to mark them down. SteelSeries could definitely work on dampening the sound a little, or provide us the opportunity to test their Brown and Blue equivalents.

But finally, onto the Omnipoint Mechanical switches with their adjustable actuation point. We went into the review with some doubts, wondering what difference it would actually make, but as soon as we began changing the slider in the software and getting an immediately different result from the keys, we were hooked. Typing on the keyboard with the response dialled in at 0.4mm felt excellent, the difference felt noticeable from the Razer Greens that I usually type on. Going further than that, being able to set the WASD keys to 0.4mm and have the surrounding keys have a deeper actuation point can give an actual advantage, both in terms of the movement keys responding faster and the surrounding keys, such as grenade or use are harder to press accidentally.

Now, the biggest issue weve found here is the £20 price difference between the Apex 7 and the Apex Pro. Considering how much better the Omnipoint Mech keys are, we cannot think of a single reason to recommend the Apex 7, at least with the QX2 Reds. Buy the Apex Pro instead. 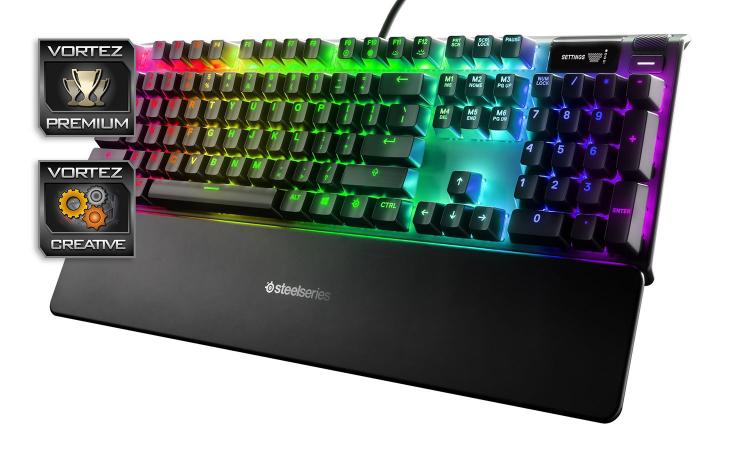 The Apex 7 and Apex Pro are excellent keyboards, but you need to buy the Pro to truly appreciate the effort SteelSeries have gone to. However, the £180 and £200 asking prices are much too steep.

Neutral
+- OLED screen is fun but the use cases are limited