👤by David Mitchelson  Comments 📅06-11-12
Conclusion
All-in-one liquid CPU coolers are an undertaking which many brands are involved in at the moment since these products usually result in low-noise, easy installation and provide more space. Its the turn of Thermaltake to go under the spotlight today with their Water 2.0 Pro, so how does this product shape up?

Getting Water 2.0 Pro installed is reasonably easy and especially so compared to respective air coolers. After just a few steps the entire CPU cooler can be attached to the system and with it attached on offer is a low-noise solution which is both compact and lightweight. Compared to an air cooler for example, there is little to no memory clearance issues which is often a concern to many who are looking at upgrading their cooling. 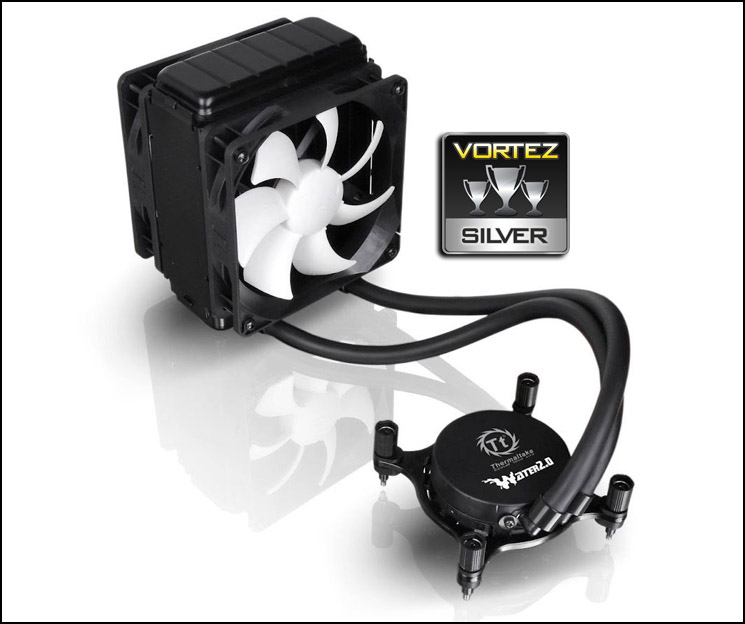 On the performance front, Water 2.0 Pro delivers some good results for stock and overclocked tests. When comparing against other liquid coolers our unit does well, but compared to other air coolers the same cant be so easily asserted. The benchmark for air coolers has been set very high due to materials and advancement in methodologies and the competition between air and liquid has never been so competitive. Water 2.0 Pro offers improved thermal performance compared to a number of rival air coolers but against the top-end its neck and neck in terms of performance comparison.

At £90, Water 2.0 Pro occupies a position nearby Corsairs H100. At some stores H100 is even cheaper than Thermaltakes offering, many hold H100 in high regard - Thermaltake should really adjust their pricing accordingly if they want to have a strong chance of competing with Corsair's Hydro Series.

So, pricing is a little too ambitious for this 120mm liquid cooler even though it does have a thicker radiator when compared against the plethora of other 120mm liquid coolers currently occupying the market which hit the £60 mark. Being 120mm means this unit will be more compatible with a wider range of computer chassis compared to 240mm variants which generally require mounting holes and clearance in the roof. So based on the weight, size, compatibility, performance and noise levels we are encouraged to give this cooler the Silver award.