👤by David Mitchelson  Comments 📅10-09-19
Conclusion
XFX arent adverse to exotic naming systems and the arrival of THICC II only solidifies this.

Launching this week, there are two variants of the 5700 XT  THICC II and THICC II Ultra. Both graphics cards look identical in their appearance, it is underneath where the changes occur. XFX has given Ultra a beefier power delivery system and has optimised the GPU clock boost to reach higher possible averages. We recently reviewed the ROG STRIX 5700 XT and while this card boasts the highest clock speeds from any 5700 XT, Ultra still managed to comfortably compete, sometimes even bettering the STRIX solution.

The THICC II thermal solution consists of a huge double-heatsink and two 100mm cooling fans, both components work effectively to keep the GPU temperature much lower than the AMD reference design. On our video review we had feedback to include VRAM temperatures due to poor performance from XFX in the past and after sustained load we discovered the temperatures would reach the low 80s. 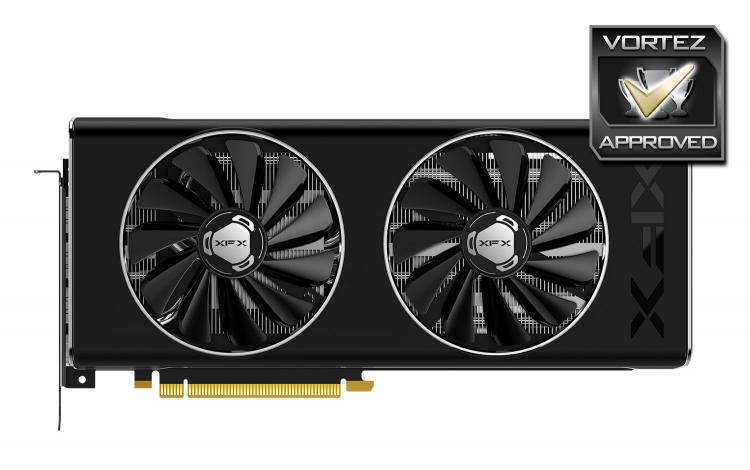 THICC II may not have all the bells and whistles that some graphics cards offer but for those wanting to simply tap into great 1440 performance, its great card to pick up.

Size is an obvious attribute which will need to be considered when upgrading to THICC II as it could struggle to slot into some computer cases.

XFX has priced THICC II Ultra at $440 USD - £420 GBP. We believe this represents good value for an aftermarket solution for 5700 XT and one which provides a reasonable factory overclock and backed by a 3 year warranty.

The THICC II Ultra is big in size and big on performance.

Cons
- Big and bulky
- High power consumption
Click here for an explanation of our awards at Vortez.net.