We've seen some big leaps in GPU rendering performance with most every NVIDIA GPU revision. Indeed AMD have often been found wanting with their products of late which had fallen well behind in the race to become the fastest GPU on the planet. I could end the review by saying that NVIDIA have reclaimed the performance crown once again however I feel that would be short changing you, the potential buyer of this GPU.

You see, NVIDIA have enjoyed at least a couple of years of victory after victory, for the most part outpacing their AMD/ATI counterparts. While we have shown today's sample to be much the same, the performance gap is much smaller than it once had been. Were it not for a nagging thought in my sub conscious I would have absolutely no hesitation in proclaiming the GTX680 to be without a shadow of a doubt the single best graphics card on the planet. That nagging thought has plagued me throughout this review - the GTX680 could have been so much more.

Yes it is a blisteringly fast graphics card, for the most part outpacing the HD7970 on the vast majority of occasions. It does this while running cooler than the AMD competition and using less power than it's forbear. It's also much quieter. Clearly NVIDIA have made some great strides with their power efficiency drive and for that they deserve heaps of praise. Yet I cannot help feel though that there is much more potential in Kepler than has yet been realised.

The 2GB of GDDR5 while adequate for today's gaming requirements, I do worry about tomorrows applications. I would also have liked to have seen a bigger jump in performance, such that we saw with the HD7970. You may think I'm just being greedy or that I have been washed away with the long wait and hype surrounding Kepler. That could well be the case on both counts but it would also be fair to suggest that NVIDIA have only done 'just enough' to reclaim the performance crown an not taken AMD apart like we have seen in the past. It appears that NVIDIA are waiting for something, holding back the true potential of Kepler until they are forced to play their hand and unleash the beast within. 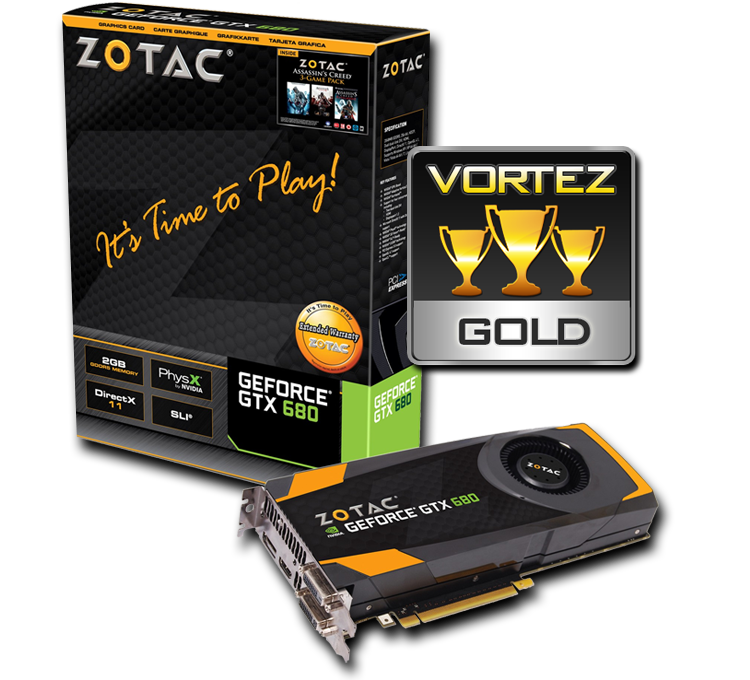 Regardless, it can be no denying that the GTX680 and more to the point ZOTAC's interpretation of the card is one mighty GPU package. It cut through everything we could throw at it, falling second only to the dual cored HD6990 (on occasions it even beat this!). I was thoroughly impressed with how quiet the card was and also the drop in power consumption. NVIDIA then have certainly fullfilled their quest to create a power efficient card capable of retaking the performance crown. So with this in mind it is deserving of an award. I dearly wanted to give this our premium, top of the class platinum award but feel this needs to be reserved for what may be on the horizon as we wait with anticipation (again) to see how NVIDIA will counter the impending arrival of the HD7990.

So our Gold award is bestowed on the ZOTAC GTX680 - a worthy award which matches the performance crown which sits upon its head.

Click here for an explanation of our awards at Vortez.net. Thanks to ZOTAC for providing todays review sample.