👤by Richard Weatherstone  Comments 📅28-03-15
Conclusion
Comparing two cards of the same ilk is difficult at the best of times as both use the same GPU core and the same memory. The main differences between the two cards is in how it delivers the power. The older AMP! Extreme is what it says - Extreme. The voltage regulation is stupendously big, options for serious LN2 over-voltage are there, along with an ambitious USB driven OC+ feature which you may/may not find useful depending on how into overclocking you are and let's face it if overclocking is not your bag then this card may be a waste on you. On the other side of the ring is the Core Edition. Having faster clocks out of the block you would be forgiven in thinking this was a better card. True, it is more efficient as it requires much less components to attain a faster clockspeed but ultimately, when the overclocking envelope is pushed, we know where our allegiance would lay; with the AMP! Extreme (non-core). 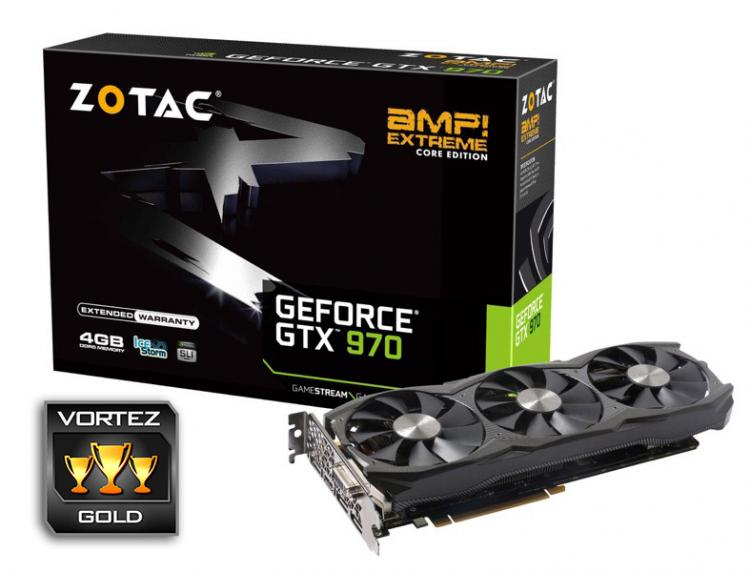 That isn't of course to say you should dismiss the Core version. By itself it is an exceptionally good graphics card which represents the GTX 970 very well indeed. It is one of the fastest GTX 970's available and the graphics cooler is comparable, if not slightly better performing than the competition which in itself is no mean feat. The fact it does this with a 2x6 pin setup is further evidence of ZOTAC's technical expertise. We wouldn't have called it 'Extreme' though. That title should be reserved for the older card which if ever there was a product deserving of that title, this is it. Perhaps our only criticism is the size (width) which will restrict its use in certain enclosures and as it is a little thicker, may also restrict airflow in SLI if the sister card is placed in the next available slot. That said, it wouldn't be extreme if it were small and conformed to regular dimensions would it?

Price-wise, the older Amp! Extreme comes in at £369.99 RRP which is some £20 more than the Core version at £349.99. The AMP! Extreme price weighs heavy on us because it is perhaps one of the most expensive GTX970's available which is a shame. The £20 difference from the core can be justified in terms of the extra components used on the older Amp! Extreme and to further entice buyers of the newer card, it comes with a higher factory overclock. So if you are looking for efficiency, a faster stock card and less gimmickry while saving £20 then the Core version will suit you better. Those who look for extravagance and lots of overclocking options, especially for LN2 users then the older card will be better for you. 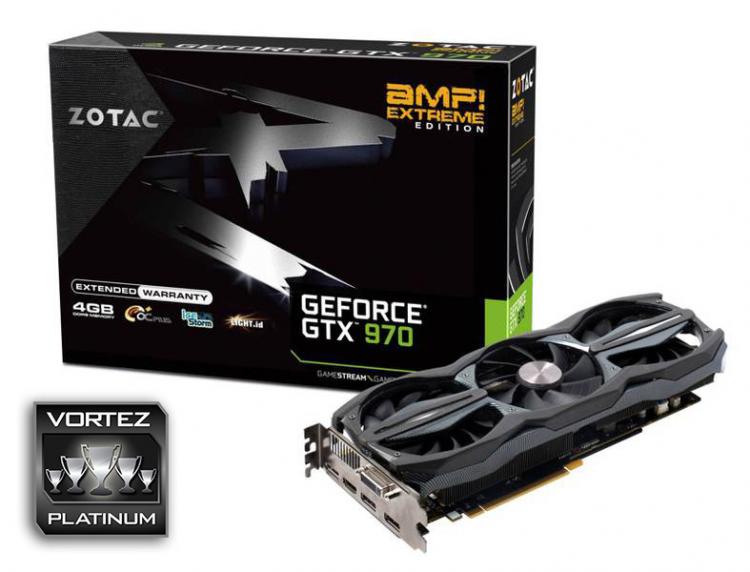 We decided on Gold for the Core version as we feel it is a very good example of what a graphics card should be but adding to that, it also happens to come with one of the fastest factory overclocks available. We rarely hand out platinum awards but we cannot imagine there will be a better GTX 970 than the AMP! Extreme. It has everything. Class leading packaging, cooling, features and overclocking headroom. So whether you want an extremely fast but discreet version of a graphics card or the ultimate in offerings, ZOTAC have provided here two samples that cater for both camps. If you want further options then take a look at the other GTX 970s from ZOTAC (of which there are 5 in total) so you're sure to find a graphics card based on the GTX 970 that fits the bill. Us? We'll stick with the AMP! Extreme which is ridiculously excessive, stupidly fast and cares little for anything other than all out performance!

The AMP! Extreme GTX 970 is Extreme in every sense of the word. We love it!

Cons
- Girth may be an issue for some