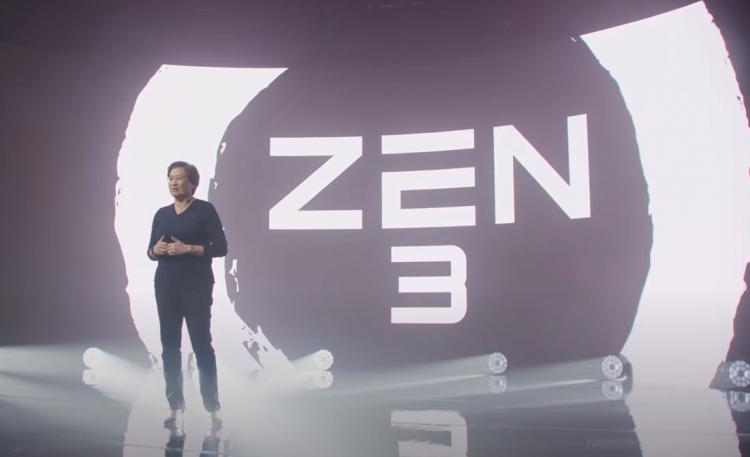 It's going to be a big October over at AMD's headquarters in Santa Clara. Later this month they're unveiling the Radeon RX 6000-series GPU - affectionately codenamed 'Big Navi' - to the public for the first time, but are starting with possibly the easiest slam dunk of the Autumn in the form of Zen 3/Ryzen 5000-series CPUs today. The livestream is now available as a VoD which we've embedded below.

AMD touched on the architectural revisions implemented in Zen 3, drawing distinctions in both design and performance between it and Zen 2, but swiftly got to the meat of the presentation by outlining relative performance. But we'll get to that. 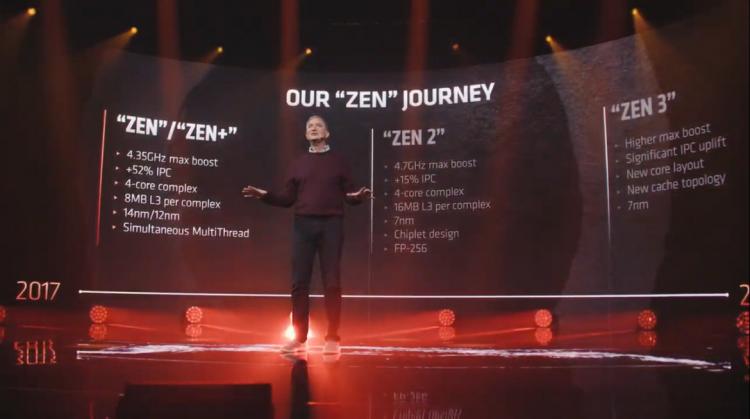 Next generation Ryzen 5000-series processors are built utilising the Zen 3 architecture, a major redesign over Zen 2 with the aim of improving IPC while maintaining excellent multi-core and performance per Watt characteristics. Where Zen 2 innovated by implementing the chiplet methodology, Zen 3 heavily reorganises the fundamental Core Complex (CCX) to realise improvements in performance.

The Zen and Zen 2 Core Complex utilised a four core CCX, all sharing a relatively large L3 cache; a single die in a desktop Ryzen processor would have two CCX's for up to eight processor cores total. Zen 2 greatly increased the amount of pooled L3 cache per CCX, partially to offset increased memory latency induced by moving the IO to a separate die (the IOD). 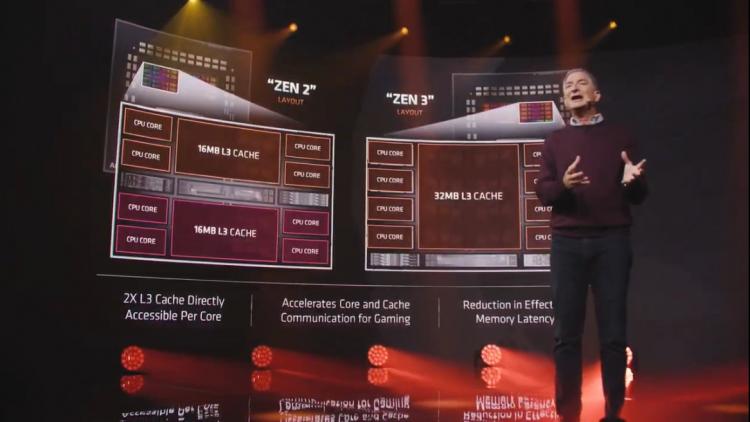 Zen 3 changes things up by combining eight cores into a single CCX, pooling together the L3 cache to 36MB. This greatly increases the effective shared cache pool each process has full-speed access to, and means that they don't have to hop to an adjoining CCX to access adjacent data (which would incur a latency cost). Other more granular aspects of the processor have also been redesigned to feed this greater processing power including 'zero bubble' branch prediction and wider issue int and float engines, and the team are claiming it resulted in double-digit IPC improvements overall.

From a more high level perspective not a huge amount changes. The desktop platform can still support up to 16-cores with SMT (32-threads) in the AM4 socket, and processors with selectively disabled cores will populate the product stack from 6 to the full 16. By retaining TSMC's 7nm node they're also able to do this within a 105W TDP envelope, necessitating no changes to current processor cooling solutions. It's even possible that this approach will mean a higher effective yield as die no longer needs to favour similarly equipped CCX's. 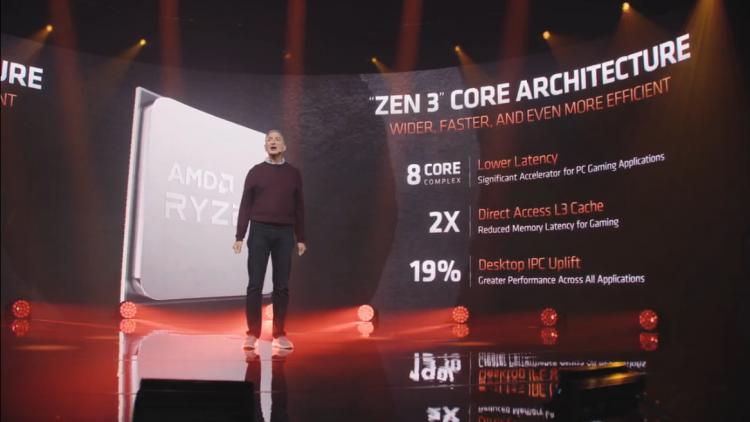 The benefits however are clear: a big boost in single-thread performance. That will mostly be down to the architectural changes, but a more mature process node will also allow AMD to increase maximum boost operating frequencies to squeeze more MHz out in lightly threaded workloads. AMD boast that their 5000-series 1c Cinebench scores reach new milestones, healthily passing 600 for the first time and overhauling the previously dominant Intel. But more on that in a bit. 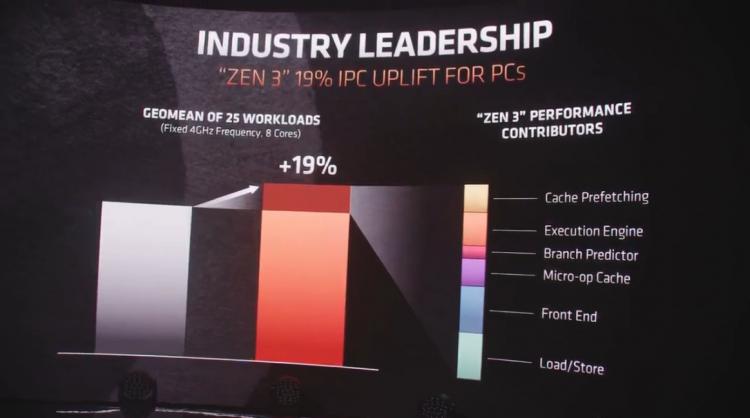 There may be more changes under the hood within Zen 3 that AMD weren't able to share during the livestream, so keep an eye on reviews and architectural deep-dives before chips based on it become available.

This November 5th AMD will be launching the Ryzen 5000-series for mainstream and enthusiast desktop PC segments as a cohort of four processors:

The initial lineup is at first glance a fairly comprehensive replacement to the current Ryzen 3000XT-series gaming and enthusiast lineup, but won't be without its controversies as we get closer to launch. 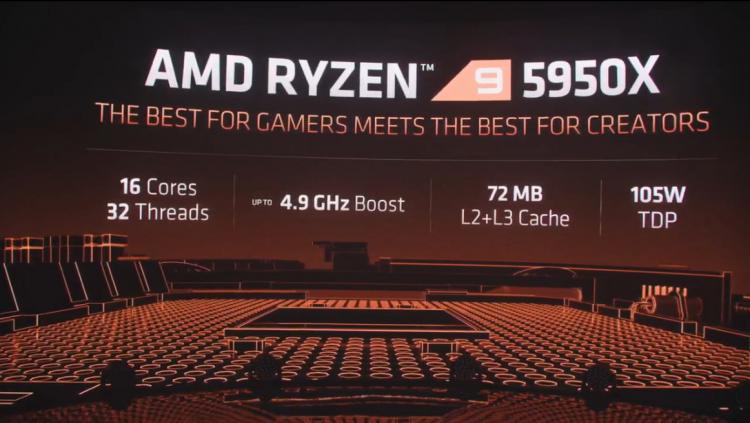 Sitting at the flagship position is the Ryzen 9 5950X. This SKU leverages the full potential of the processor with 16-cores and 32-threads, clocking at up to 4.9 GHz under boost conditions. That's a behemoth of a design for both single and multi-core performance in the mainstream space, and matches the MSRP of the Ryzen 9 3950X (launched Nov. 2019). It's pitched as the choice of content creators looking for a more appropriate platform than Threadripper in terms of both budget and capability.

The Ryzen 9 5900X meanwhile is billed as the 'Worlds best' gaming processor. It's a 12-core, 24-thread chip that utilises cut-down 6-core CCDs but the whole pool of L3 cache (a total of 64MB) and clocks to 4.8GHz. Once again the TDP is at 105W, indicating that the 5900X Boosting table is perhaps able to be a little more aggressive with clocks across 2-4 cores than the 5950X. 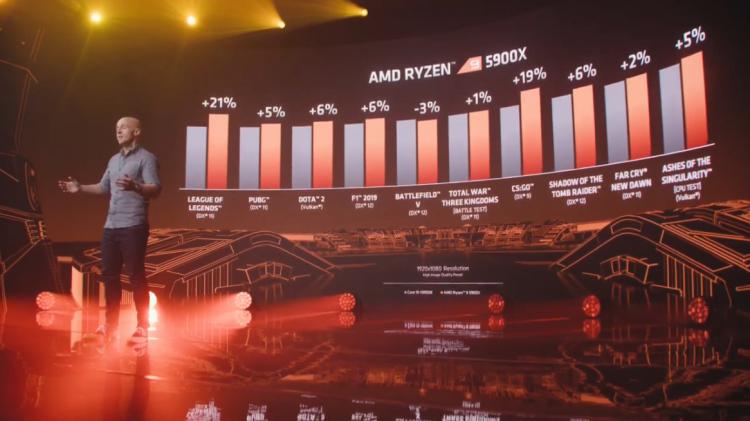 AMD claim a huge improvement over their previous best - the Ryzen 9 3900X - with gaming benchmarks gaining on the order of 26% thanks to the architectural update and higher operating frequencies. But the biggest fillip for AMD's ambitions in the space are a series of results comparing it to Intel's Core i9-10900K, placing it handily in the lead at 1080p (often viewed as the most indicative of CPU performance) across a wide range of titles.

Less was said about the Ryzen 7 5800X and Ryzen 5 5600X. 8-core and 6-core designs respectively, they're likely to benefit greatly from the underlying architecture change if processor boosting algorithms are aggressive enough (the chips already slightly surpass the older generation in maximum boost frequency). It's notable that the 5600X has a relatively narrow TDP envelope of 65W, matching the Ryzen 5 3600 rather than 3600X/XT. Those hopeful of excellent overclocking headroom however would be wise to remember the aggressive binning and thus relatively low potential seen throughout the Ryzen 3000-series.

AMD are repositioning their product stack price points slightly with this generation:

As a result, for every position except for the flagship, the price per core is going up with the Ryzen 5000-series. This if nothing else will make upgrading from older Ryzen 2000 and 3000-series processors to the newest all the more difficult to jump for, even given double-digit perf/core improvements.

No announced change to Chipset or Socket 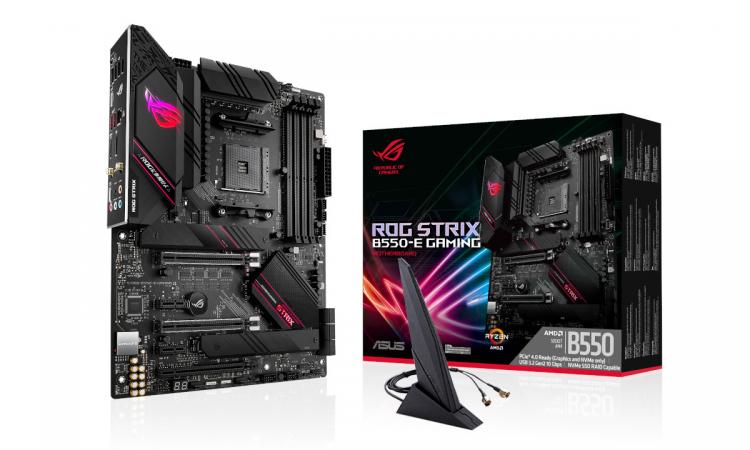 Ryzen 5000-series processors will be compatible with the surfeit of X570/B550 etc. motherboards already on the market

AMD may have more planned between now and November 5th, but currently all signs point to a continuation of the 500-series motherboard chipset into the launch of the 5000-series processors. The socket (AM4) and memory standard (DDR4) remains the same, and implicit in this launch is the understanding that an associated motherboard would not be forwards-compatible to the following gen (expected some time in 2022).

As a result the current smorgasbord of X570, B550 and recently released A520 will more than meet the reqwuirements of Zen 3, so long as they have recieved a BIOS update if they're already in the hands of end-users. Older AM4 socket motherboards, particularly the 400-series platform, may have a BIOS update to support Zen 3 processors, but we wouldn't bet that all manufacturers will treat them equally.

Remember also that the only platform which offers PCIe 4.0 support throughout is X570; both B550 and A520 portion off some of the functionality as a means of differentiating their featureset.

AMD have more planned for October 28th, where a second livestream will debut Big Navi AKA the Radeon RX6000-series to the world. They couldn't leave us without a small teaser before then however, and finished today by showcasing in-engine footage of a system equipped with a Ryzen 5000-series processor and RX 6000-series GPU running games at 4K 60fps. We shall see how well optimism of Zen 3's unveiling holds in the face of NVIDIA's revised launch date for the GeForce RTX 3070.

There are currently 322 user(s) online:
Google