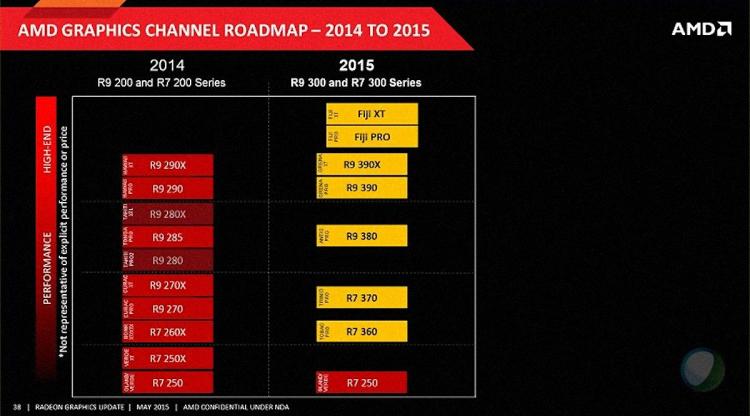 Yesterday
we relayed the news
that AMD's upcoming Radeon Rx 300-series launch may consist solely of rebadged Radeon Rx 200-series GPUs. Today partial confirmation appears to have arrived in the form of a leaked product slide from an AMD briefing in May, a slide that also indicates a delayed release of Fiji-based graphics cards.

The slide, part of a kit titled "RADEON GRAPHICS UPDATE", lays out AMD's 2015 graphics roadmap. Certain parts are already public knowledge - the R9 380, 370 and 350 were each made available through OEMs last month, although they didn't have attached codenames. Others have only come to light in recent days, specifically the Grenada GPU (i.e. 'Enhanced Hawaii') occupying the top of the Rx 300-series as the R9 390/390X. Finally the slide also indicates that AMD's brand new Fiji GPU is being reserved for a whole new flagship SKU, which at the time was still under wraps.

Fiji and Fiji XT will be a part of a brand new SKU different from the Rx 300-series range and at the top of AMD's graphics product stack.

As mentioned in the original OEM release the new Rx 300-series simplifies AMD's lineup without offering new hardware to mainstream consumers, and to compete they'll likely have to cut prices. Enthusiasts will be catered to by a new SKU - Fury and Fury X are currently doing the rounds - competing with NVIDIA's high-end GeForce hardware (i.e. the GTX 980 TI) and Titan X. Those sporting high-resolution monitors will be able to jump on an 8GB R9 390/390X, in the knowledge that performance will be better than the R9 290/290X thanks to larger frame buffer and (anticipated) higher memory bandwidth.

Also indicated on the slide is a slight delay from the release of the Rx 300-series to the new Fiji-based graphics cards. Hopefully there won't be a delay or 'paper launch'. We anticipate that the Rx 300-series will be available from their E3 Event on June 16th; meanwhile Fiji will be formally revealed but not available until slightly later this month.

Concrete information is due on June 16th at the E3 Webcast.